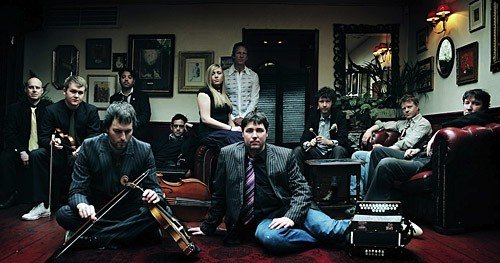 The past six years have seen Bellowhead progress from being a band whose sole intention was to â€˜have fun at festivalsâ€™ to recording two acclaimed albums (Burlesque, Matachin), performing at the 2008 BBC Proms, becoming Band in Residence at the Southbank Centre and being voted Best Live Act at the BBC Radio 2 Folk Awards no less than four times.

And thatâ€™s not including the DVD release plus UK and North American Tours. And now we have a glorious third album, Hedonism, produced by the legendary John Leckie, released on October 4th with a full UK tour beginning at the Bristol Old Vic on 11th November.

On Hedonism, their magical third studio album, nothing and everything has changed. As ever, the music is a delirious amalgam of schooled musicianship and uproarious, anarchic abandon. 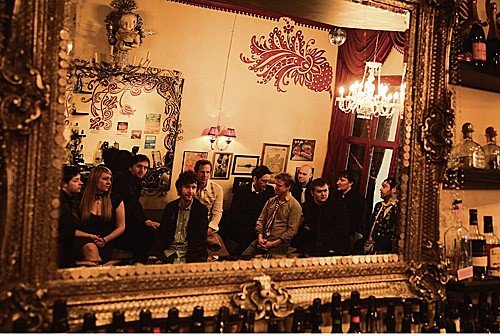 Working with John Leckie (Stone Roses, Radiohead, Muse) and recorded at Abbey Road Studios, the band embellish their traditional English core with the scale and theatricality of Arcade Fire, the unsparing, bittersweet worldview of Jacques Brel, all served with a sprinkling of skewed humour.

Musically, Hedonism is a heady mix. The seventeenth century English folk standard â€˜A Begging I Will Goâ€™ is dragged thrillingly into the modern age, its ancient roots mixed with echoes of ska, Isaac Hayesâ€™ â€˜Theme From Shaftâ€™ and a Louisiana jug band.

Inspired by AL Lloyd, â€˜The Hand Weaverâ€™ provides a refreshingly tough female central character, while the deranged, throwing out time, Barbershop-punk-folk version of â€˜Little Sally Racketsâ€™ is inspired by a bootleg recording of the Young Tradition from a 60s folk club.

â€˜Broomfield Hillâ€™ tells a tale closely related to the â€˜outlandish knightâ€™ stories depicted in ancient cave drawings: the tune is from â€˜Bogieâ€™s Bonny Belleâ€™ and features English bagpipes, while the chorus is borrowed from a verse in a Robin Hood ballad.

â€˜New York Girlsâ€™ has equally exotic origins: a raucous polka that somewhere along the line boarded a ship, acquired â€˜forebitterâ€™ lyrics and became a shanty.

It adds up to a truly compelling album. Punctuated with galloping instrumentals and breezy acoustic pop, a bawdy joie de vivre runs through Hedonism, something that those lucky enough to have witnessed the band live will recognise.

Although this is a Bellowhead album through and through, the influence of John Leckie is apparent.

There is a real sense that Hedonism is a landmark achievement in the bandâ€™s history and one that captures the dynamism and energy of one of the UKâ€™s finest live bands, regardless of genre.