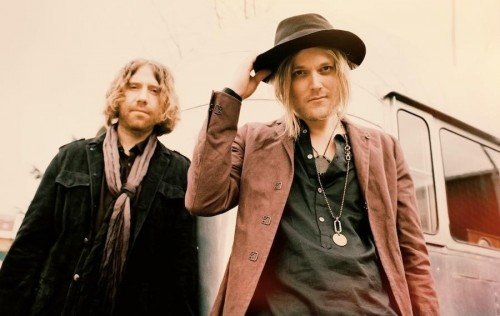 The single is taken from their new album ‘Songs of Patience’ set for release on September 3rd in the UK, on Ark Recordings.

Alberta Cross are Petter Ericson Stakee (vocals/guitar) and Terry Wolfers (bass), a Swede and a Londoner with Brooklyn as their home.

The title of ‘Songs of Patience’ is, though, in many ways, literal. Once touring for their debut was done, the band had headed to an old, abandoned house in the middle of nowhere near Woodstock, NY.

There, they braved the freezing winter and embraced a sense of the buildings haunted past to start working on ideas for a new record. But this record was to take a much longer, more winding road, as Petter Ericson Stakee explains:

“In the three years since the last album we relocated to Los Angeles, moved back to New York, returned to being a band with just two permanent members and have had at least five producers hands on the album.

I loved LA, but the combination of relocating and hitting the studio straight away made me spiral out of control. I reached a very dark place. I partied too hard, blew my newly-earned money and went home to Sweden.

Once I hit rock bottom and plummeted back to the planet, I knew what I had to do. I moved back to Brooklyn and reformed my home there. And thats what Alberta Cross is, me and Terry, my cockney brother.”

‘Songs of Patience’ is the sum of three years worth of parts a struggle that concluded in one hell of an album, and a brilliant new chapter in the musical journey of Alberta Cross.
albertacross.net