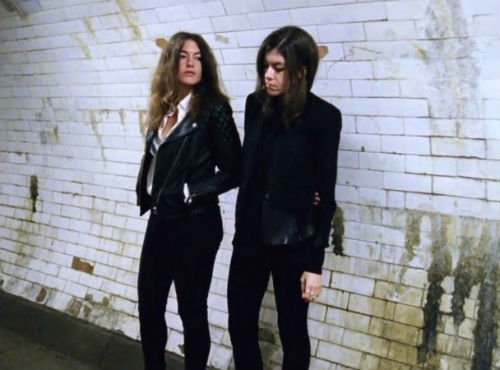 London-based sisters 2:54 – Colette and Hannah Thurlow – share this arresting video for ‘Blindfold’, another riveting and powerful number (after ‘Orion’ and ‘In The Mirror’) lifted from their upcoming second album ‘The Other I’, out November 11th on Bella Union.

Irish-born singer Colette Thurlow explains: “‘Blindfold’ was one of the first tracks we wrote for the record and came to symbolize a shift in focus for us musically. We knew we wanted ‘Blindfold’ to have a direct, performance-based visual that captured Hannah, Alex and I and our band, but that also revealed both the beauty and alienating quality of the city we’ve grown up in. We’ve wanted to work with Charlie Robins and Chris Hugall forever! We’re big fans of their work, the timing was finally right.”

As Colette explains, the album’s title was inspired by a favorite poet, Percy Shelley, “a rousing romantic, politically charged, a proto-punk of sorts. He called his friend and muse Elizabeth Hitchener the ‘sister of my soul, my second self.’ These lines kept returning to me last year and from there I arrived at The Other I.

The Other I is an enquiry into the duality of the human experience – the division between the self that pounds on like a juggernaut in your head, and the self you present to the world. The idea extends to Hannah and I, to our sisterhood. We know intrinsically what the other thinks and feels, music is just another language we use to communicate.”