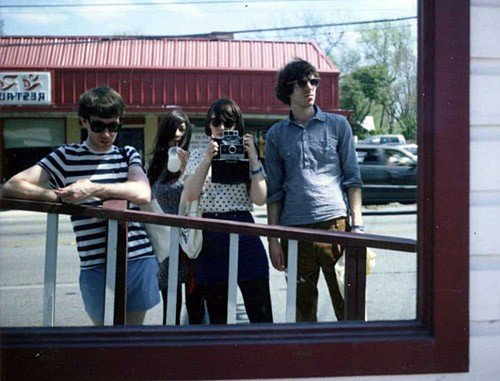 After a well-received singles and shows both here and in the US, the quartet of Roxanne Clifford, Patrick Doyle, James Hoare and Marion Herbain, otherwise known as Veronica Falls retur this autumn with their much anticipated debut LP, released in October on Bella Union.Come On Over by Veronica Falls
Check our Q&A with Patrick Doyle:
WHAT HAS BEEN THE HARDEST PART OF BEING IN THE BAND FOR YOU?
Aside from getting up early for the US Embassy; being in a band isn’t that hard, really.

TELL US A BIT ABOUT YOUR EARLY DAYS AND HOW THEY DIFFER FROM NOW?
I think I was slimmer when we started, but on a positive note I think I’ve got better at playing the drums. I think we’ve learned how to play together better and seem to be in a different place musically, which is cool.

WHAT WAS THE LAST GIG YOU PLAYED, WHAT DID YOU THINK OF IT?
Last night we played at Pianos in New York City. It was really fun. Playing in New York seems to always be really fun for us. We have a lot of friends there, so it’s a great excuse for a reunion. We played with The Hairs and McDonalds, who we’re big fans of already.

WHAT’S THE MOST SUCCESSFUL THING YOU GUYS HAVE DONE TO DATE?
That’s a tough question, it seems like lately every week we do something better and more fun than the week before. Getting interviewed by Nardwuar at SXSW was really flattering, it felt like a pretty special moment for us as a band.

WHO HAS HELPED YOU THE MOST GET TO WHERE YOU ARE TODAY?
My mum. No joke.

WHAT’S COMING NEXT FOR THE BAND?
We’re in the US right now, touring the album as it just came out here. When we get back to the UK the album comes out there so we’ll be back on the road until mid November. We’re playing some shows with the Dum Dum Girls too, which should be cool as those girls are really fun to hang out with.

IS IT HARD BEING A NEW BAND IN TODAY’S INDUSTRY?
It’s hard to say as it’s all I really know… I’ve been making music since I was 17 and it doesn’t feel that different really. I think you just do what you can and hopefully people can take something from it. All you can really hope for is that the music you make is well documented.
HOW IMPORTANT IS THE INTERNET AND SOCIAL NETWORK SITES TO THE SUCCESS OF YOUR BAND?
It’s really nice that people have an easy way of interacting with the band and it’s definitely the best way to keep people updated when you’re on the road.

WHO WOULD YOU MOST LIKE TO COLLABORATE WITH IN THE INDUSTRY?
Personally, I’ve always been a big fan of Linton from the Aislers Sets’ production and would love to see how she might interpret our music – but I’m sure if you ask the others you’d get very different answers. Also like Mitch Easter’s production a lot, as I’m obsessed with the early REM records. He just worked with Big Troubles too, so maybe he’s available?
veronicafalls.com
VERONICA FALLS LIVE DATES
OCTOBER
20 // LONDON, Lexington
21 // CARDIFF, SWN festival
22 // GLASGOW, Captains Rest
23 // MANCHESTER, The Castle // h