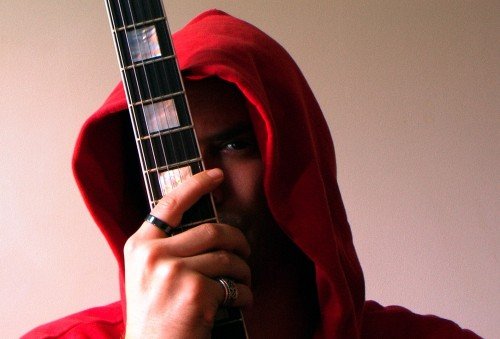 From Plymouth, Aberdeen and Brighton to Cambridge, Leeds and Northampton, busking machine Warren took to the streets on a one man musical odyssey with nothing more than the clothes on his back and a guitar in his hand.

The result was a musical odyssey that embraced virtually all of the UK and thanks to the money raised by his busking exploit, this anonymous artist has raised the funds to record and release his new album. In a world dominated by Simon Cowell’s image led brand of artist development, Warren Dean has turned music on it’s head and who knows may even be the act that comes out of the shadows at Christmas to take on the X Factor hit machine.

Warren Dean is the pseudonym of an anonymous 27 year old rock musician from London who, as outlined above, has busked his way around the UK to find his voice and fund his new career in music. In just a few months and 50 towns and cities later, this anonymous street musician has raised enough money from his music to fulfil his dream and record his first album ‘Who Is Warren Dean?’

The aim now is to break into the music charts using the money raised from touring the UK streets, ‘Who Is Warren Dean?’ is an album packed with catchy riffs and sing-along choruses.

‘Thank you all so much as without you this would not have been possible. It may be the complete opposite to the Britain’s got Talent, X Factor way the public usually contribute to the creation of a recording artist but in some small way I think the principal is the same. So if you happen to remember the guy singing and playing his heart out just for you, wearing his red converse trainers, thanks for your pennies, and in some cases pounds as you have made this recording possible. I hope some of you remember where you first heard these songs, literally on a street in your hometown!
Keep rockin,
WD’
http://www.warrendean.net