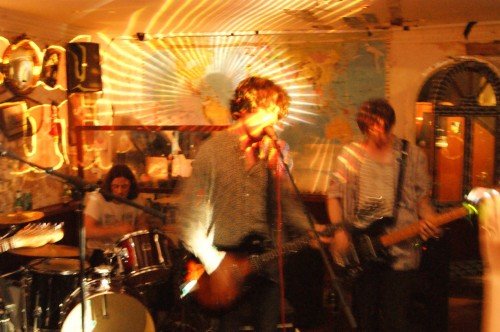 Stoke Newington based 4 piece Victor Talking Machine, release their new EP ‘Had Enough’ on 12th November and to celebrate the occasion, they are giving away as free download the rather great live track ‘Penny Arcade’.

Collaborating with producer Marc Waterman (Elastica, Ride, Ash) meant V.T.M. could share a vision and create a distinctly British angle on guitar music with their own influences and twists laid over the top like an insistent snare drum.

Recorded live with very few overdubs, the “Had Enough” EP shows a band moving forward through their very own musical landscape.

Frontmen Ricky Clark and Stephen Smith met at university in North London, developed a bond through mirrored musical influences (Buzzcocks, Libertines, The Velvet Underground) and with the recent addition of Matt Turner on bass and George Latham on drums, the band began playing shows at the beginning of the year.