Universal You are an Edinburgh based band, featuring a singer from Kazakhstan. 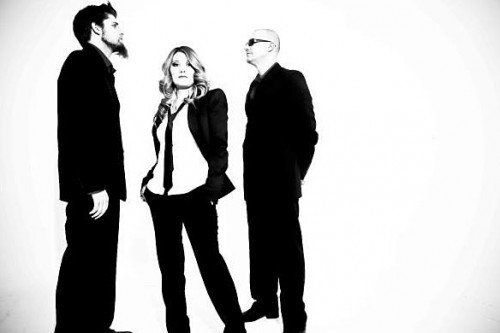 They are a three-piece with soaring vocals and raucous guitars, and are visually striking due to their lack of a drummer or a bass player! In a musical culture full of ordinary trends, they are a welcome change from the ordinary.

â€˜Universal Youâ€™ are Paul Finnie, Gulzhan Ibraveya and the phenomenal guitar player Mark Grant. Paul and Gulzhan first met in Kazakhstan when both were working in the oil business where they started writing songs together and performing for their co-workers and the locals.

Their first single â€˜Your Sin Cityâ€™ was released to rave reviews and gained considerable media coverage throughout the world.

Boasting a wide range of influences from Michael Jackson to Guns n Roses, the band is fronted by charismatic, Kazakhstani front-woman, Gulzhan who was recently described as, â€œThe diminutive singer with the big voiceâ€ by The Scotsman, an observation which is certainly well founded.

October 11th sees the release of Universal Youâ€™s new single â€˜ISKALAâ€™ a cover of a very famous Russian song, which they have translated and recorded in English.

The song was produced by world-renowned producer, Michael Brennan, who has a very successful CV, having worked with bands including Snow Patrol and The Super Furry Animals.