Transmit Now is an effervescent Florida based powerpop-rock-punk quintet. Their album ‘Downtown Merry Go Round’ is released on ADA Global on Nov 8. 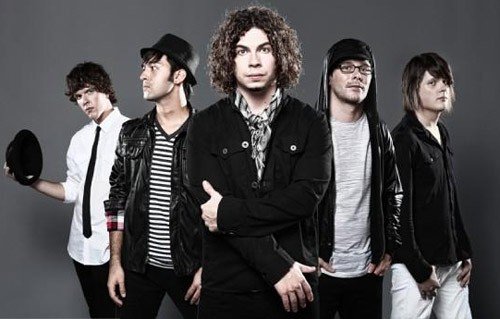 Starting their careers with a slot on the 2008 Warped Tour, Transmit Now were determined to be noticed from the get go! Their debut (self-titled) album was produced by Pete Thornton (Paramore, Shinedown) and Brooks Paschal (Sullivan) and went on to garner much press from the likes of MTV, Alternative Press, AbsolutePunk and The Daily Chorus.

They hit the road with bands like Anberlin, Framing Hanley, Mayday Parade, and Mercy Mercedes and it wasn’t long before they hooked up with music industry heavyweight Jeff Hanson (Creed, Sevendust) and his record label, Silent Majority Group (Warner Bros./ILG). With a sound that is equal parts infectious melody, pop quirkiness and groovetastic riffery, Transmit Now have a joyous and anthemic quality that sets them apart from their contemporaries.

Their effervescent energy literally fizzes out on tracks like album opener ‘What You’re Thinking’ and the soaring ‘Issues’. Frontman Andy Brook’s sophisticated vocal melodies intertwine perfectly with the stomping guitars of Kevin Parrow and Tony Aguirre – just get an earful of dancefloor classic in the making ‘Let’s Go Out Tonight’.