Catherine and Allison are sisters, songwriters, and singers. Born in Alabama, as soon as they could speak they were singing, and it was always together. They’d sing in the house while their musician dad played guitar. 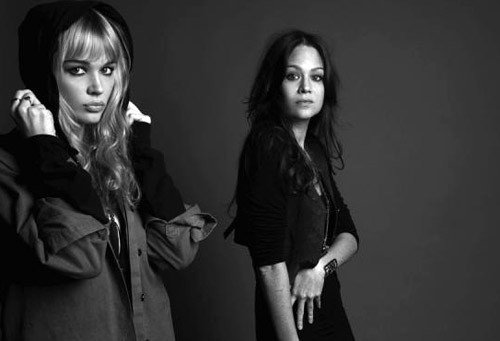 They were raised on Simon and Garfunkel, The Beatles, The Rolling Stones, Al Green, and Joni Mitchell.

They were home schooled by their hippie parents and their curriculum leaned heavily towards the arts.

Their mother is a painter as is Catherine and both sisters were professional level ballet dancers.The pair now live in New York City. Allison moved there first with a boyfriend, while Catherine came to dance with the School of American Ballet summer program when she was 17. 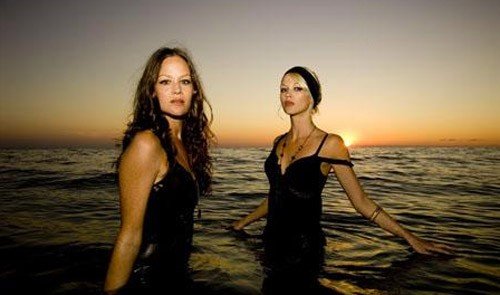 I fell in love with the place, she says. There was an immediate feeling of rightness. So much so that I lived in a party whirlwind for a couple of years.

As part of that city’s explosion of creativity the pair were friends with a wide community of musicians.

Allison later sang on Ryan Adams debut Heartbreaker album, recorded at a time when the sisters own career was beginning to take off.

And now in 2010, after three striking records, they have finally arrived at the place they’ve always wanted to be. But it’s not been easy.

After the release of 2008’s bright and poignant Thirteen Tales Of Love And Revenge the Pierces had every right to feel a little disappointed in the way things were going.

We’d had ten years of almost making it, almost getting somewhere,says Allison, the dark-haired elder sister.

â€œThe last record started to take off, Catherine adds. People were hearing us and liking us.

After the experiences we had with the first two records that felt really good.

So they had this cool, experimental, funny, ambitious record, but no support from their old US label.

We had to do everything ourselves, Allison says. We did all the photography with friends, we made the videos, and we learnt to be self-sufficient.

We had to get creative and it took us to really interesting places…we wouldn’t be the same without that. Which was great, says Catherine, but we had no money to tour.

When a series of unexpected TV syncs arrived the Pierces story went to a whole new place.

Their song Secret – written by Catherine about her and her friends inability to keep one – appeared on Gossip Girl and Dexter and brought them to a totally different audience again.

But we kept being pulled back down by a label that wasn’t willing to do what needed to be done, Allison says.

So one day they said, We’re done, this isn’t working and decided to split up.

When you pour your heart into a record and see its potential, and you also see that it isn’t going to reach that potential, it drags you down, says Catherine. It’s heartbreaking.

I felt angry and frustrated, Allison says. We were trapped in this deal that was going nowhere.

But they were saved from that fate. The day after deciding to split – the very next day – the sisters received a call that changed absolutely everything.

It was Guy Berryman,Catherine says. He asked if we wanted to join Coldplay on tour in South America.

As things turned out, the sisters didn’t end up joining that tour, but Berryman was keen to help in any way he could and that’s how we have ended up with this remarkable, beautiful record.

Last summer Berryman and Grammy Award winning producer Rik Simpson started their own production company, The Darktones and decided The Pierces should be their first project.

The album was recorded over nine months. We were working in Coldplay’s spare time, laughs Allison. And there’s not a lot of that.

Catherine and Allison already had some great songs written. Love You More is a brilliantly pointed gem written when Catherine split up with her old boyfriend.

What the sisters have created is a record as sweepingly, dramatically melodic as it is true to the Pierce’s innately cool, singer-songwriter roots.

There are elements of folk in their close, keening harmonies, while the songs themselves are fully-fleshed wonders that draw on that slow, sad sort of beauty that a classic Stevie Nicks song always had, one that would be turned into a huge great groove by Fleetwood Mac.

It’s classic song-writing, Allison says. Pop music that aims for more than just the obvious.
The past is just that, passed. Gone.

All that matters now is this great record. And signing a record deal with Polydor marks the beginning of this new, exciting stage of their story.

It does feel exciting Allison says, it really does. I suppose every new beginning does.

Catherine smiles at her sister and says, It feels like the stars are aligning.
www.myspace.com/thepierces