The Jude are an up-and-coming London-based rock ‘n’ roll band. “Ha Ha Goodbye” is their debut single release and is a sound they describe as “vicious skiffle” – a punchy, jerky, energetic number that gets you dancing in no time. 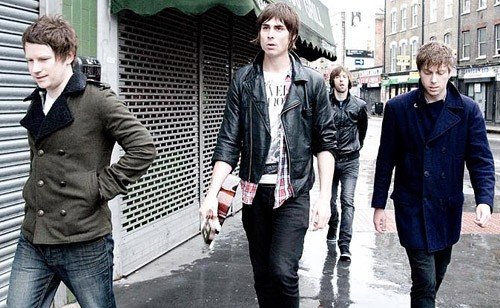 
The Jude : “The Bastard In You” *** Free B-side Download*** by 1-2-hear
The music is inspired by their grit and determination to succeed in a city that is not always kind but gives glimmers of hope and excitement.

“Ha Ha Goodbye” highlights the journey of leaving their hometowns and moving to London to jump on the musical goodship. Similarly The Jude are named after Saint Jude – the patron saint of lost causes, of hopeless cases, of the underdog.

The energy in the music transmits amazingly live and they have played with artists such as Tinie Tempah, the Kooks, and headlined the official Live Nation aftershow party for Kings of Leon last summer.

The Jude have played prestigious festivals and events such as Standon Calling, Relentless Boardmasters, the Red Stripe Music Awards, City Showcase London and an Oxjam event hosted by Phil Clifton of MTV & XFM. Having just been invited by Friends of Mine Festival to play alongside Black Lips, Detroit Social Club and Buzzcocks;
www.wearethejude.com
Catch The Jude live:
14 May : This Feeling – London
21 April – “Ha Ha Goodbye” single launch gig – Proud, Camden, London
21 May : Friends Of Mine Festival – Manchester