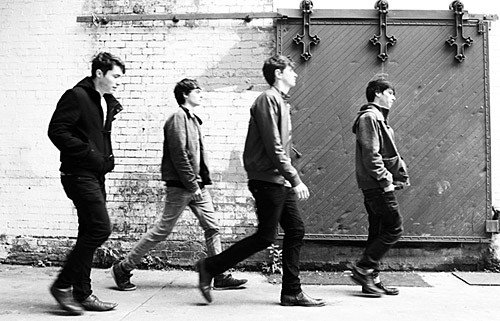 This young four piece indie rock outfit from Taunton who have recently signed to independent label Ordered Records, find inspiration from guitar bands of the 90’s, rather than their modern day peers.

Listening to them play you can hear definite tones of Echo & The Bunnymen, the raw melodies of Sonic Youth, and the atmosphere of The National.The Darlingtons, who have already appeared on BBC Introducing, are releasing their debut EP New Independent on the 16th May and it encapsulates the fiercely independent ethos of the band.
The Darlingtons – Sirens & Flashing Lights by Ordered Records
The Darlingtons – Winter by Ordered Records Tracks such as ‘Sirens’ and ‘Flashing Lights’ both take influence from British shoe gaze and stadium rock and ‘It Hangs’ delivers guitar based melodies that would sit very comfortably in the US west coast garage scene.

Even with huge guitars, big drums and sing along choruses that will stick in your head for days, they have cobbled together an ethereal, melancholic sound that will speak to a nation experiencing difficult times, and this is their thinking, it’s why they signed to a new independent label Ordered Records rather than a major. They just want to make music that moves anyone that wants to listen.

With gigs and festivals around the UK planned for summer, The Darlingtons have the potential to make a real impact on the music scene in 2011. Comparisons will be drawn for this band, but their sound is still beautifully unique.