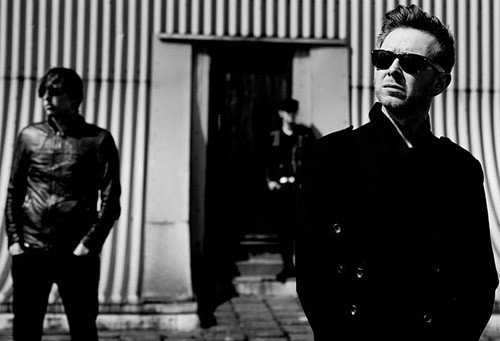 The track will be available as a download and also as a 500 limited edition gatefold 7” single, which will all be hand signed by the band. The song is both brooding and anthemic with echoes of Peter Hook’s trebly bass and U2’s ringing guitars.

The three-piece comprises of brothers, Des Lambert (vocals / guitar), Gavin Lambert (Bass) and Rob Flanagan (Drums). The band moniker originates from the Lee Hazlewood / Nancy Sinatra classic song, “Some Velvet Morning”; in fact Sinatra gave them her nod of approval and was flattered when the band asked permission to use the name.

The video for ‘Don’t Think’ was shot in a sweaty boxing gym at the National Stadium in Bangkok, with the band performing in the ring, as two female Thai boxers fight it out on camera.

Adept in the studio, exciting live, now all SVM had to crack was how to sell their records. They’re approaching this in a novel way, with MyMajorCompany, who operate via “crowd funding”, a new type of record label system, already successful in France, whereby fans are encouraged to invest in new artists, giving them a say in the future direction of the bands or singers.

SVM needed £100,000 to make it work, and they amassed that sum in an astonishing two months. Now, MyMajorCompany have enough funds to launch the band properly, this song is taken from their forthcoming album due to be released in Spring 2012.