Belgiumâ€™s most vital export since chocolate: Showstar will release their new single â€˜Monkey See Monkey Do’ on March 21s. 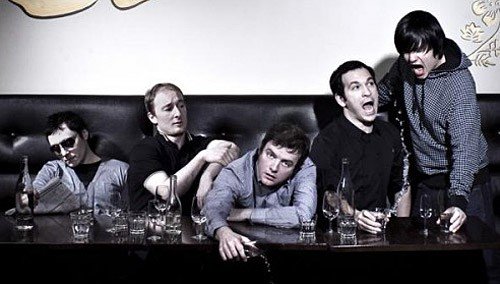 Produced by Richard Formby (known for his highly acclaimed work with Wild Beasts, Mogwai and Spectrals) Monkeyâ€¦ follows the bandâ€™s third full-length release Think Ringo and continues where that record concluded, scratching away at the bandâ€™s indie pop sheen to reveal a more sinister reality.

In their own words â€œitâ€™s another song about loneliness, retrograding, mind control and socialization paradoxâ€ – so doubtlessly a perfect fit for the UK in 2011.

“A fantastic band that takes the best bits of British pop covers it in Belgian chocolate and packages it for the world to consume.” â€“ First Coast News

The bandâ€™s second and third albums, Dot and Think Ringo (both produced by Gareth Parton of The Go! Team, Beta Band or Futureheads fame) are ample evidence of their striking gift for writing immediately infectious, epic indie pop imbued with a caustic irritability that will have the more mischievous amongst us secretly hoping these songs might mess with a few automated radio playlists.

“One of those bands that can make you say – yes, this is why i love indie music” â€“ Indie Music Database

Since their noisy formation in the otherwise quiet Belgian town of Huy , Showstar have been scrabbling away at the foundations of the status quo for almost a decade. The five piece consist of Chris: Singing and silly things, Tony: Bass guitar, and wood cutting, Dave: Guitar and endless running, Danny: Drums, and blogging and finally Bruce: Guitar, singing and wrong ordering.

“Donâ€™t be deceived by the throwaway name, Showstar are definitely a band for whom the term â€œnever judge a book by its coverâ€ applies.” – Leonard’s Lair