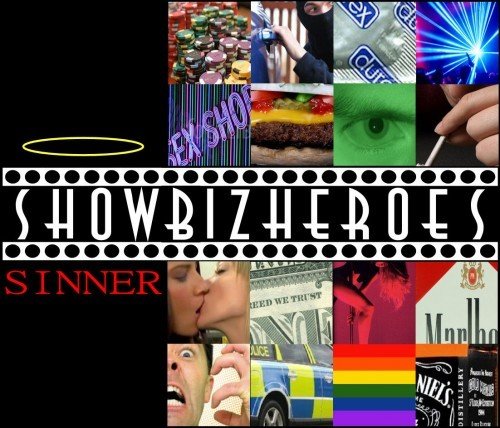 Sinner is the first offering from Showbizheroes and is taken from their upcoming debut album ‘Tales From Behind The Curtain’. Showbiz Heroes – Sinner by Manilla PR – Denise
An album recorded, produced and mixed DIY styley in the drummers greenhouse. Even in the bands very short life a cult fan base is developing with 1000’s of fans downloading their free EP ‘The Periodic Table Does Not Recognize The Element Of Surprise’, which features Sinner and five other taster tracks from the forthcoming album.

Forming in Feb ’10, the last 17 months have seen the band not only record an album and shoot their new video, but Nick, Dan, Austin & Jay have been relentlessly trying to open the doors to getting their music heard.

High on drive and low on cash they quickly realised that money opens doors not keys, so they changed tactics and started offering booze, fancy foods and sexual favours….the latter seemed to have the best take up rate but the guys quickly realised they were in fact being used, being promised a life of fame and riches but once they had had their way with them it all changed….

Feeling cheap, and 6 months of group therapy later, they borrowed a few hundred pounds and are now trying the ‘proper’ route in!

Sinner is available free from showbizheroes.com
“Are we about the reinvent the wheel? No.
Are we the next Beatles? No.
We write songs we like for the people who like them!” – SHOWBIZHEROES – 2011