Leeds based indie band, Scams will release a four track EP entitled ‘Lost For Words’ on 18th April. The EP was produced by Johann Scheerer at Clouds Hill Studios, Hamburg. 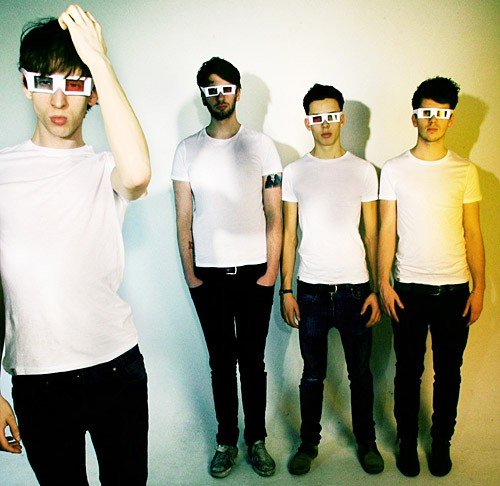 The Scams sound is rock/pop music without bullshit and without boundaries. It’s about heartfelt harmonies and searing melodies, carrying openly sincere words.

The band is fronted by Andy Morgan, bass and vocals come from Adam Fenwick, second guitars, samples and vocals are provided by Jamie Macneal and Daniel Harvey completes the line up on drums.

The band have also recently enjoyed some synchronisation success, with tracks ‘Youngblood’ and ‘Jules et Jim’ used in the new series of ‘Shit My Dad Says’ and ‘Better With You’, both shown on Channel 5 and Fiver.

Front man Andy Morgan commented on the track listing – ‘Lost For Words’ is the lead single from the EP, it’s about how there aren’t enough words to properly describe anything that anyone would ever need to say.

The next track ‘The Gunfighter (1950)’ is based on the Gregory Peck movie, fame and infamy go hand in hand.

‘Lions And Tigers And Bears’ is a funny one, I’ve always had an issue with the ‘it was all a dream ending’ in The Wizard Of Oz; there’s no place like home but always an excuse for a break from reality.

The last track on the EP is called ‘Making Maps From Memory’ and is the result of too many years in an isolated, small-minded city.

The band has just returned from a European tour with New Politics and recently supported Azure Ray. They will be announcing a series of UK dates and festival appearances over the coming months.
SCAMS – LOST FOR WORDS EP OUT 18TH APRIL
‘YOUNGBLOOD’ AND ‘JULES ET JIM’ USED IN NEW SERIES ‘SHIT MY DAD SAYS’ AND ‘BETTER WITH YOU’
www.wearescams.com