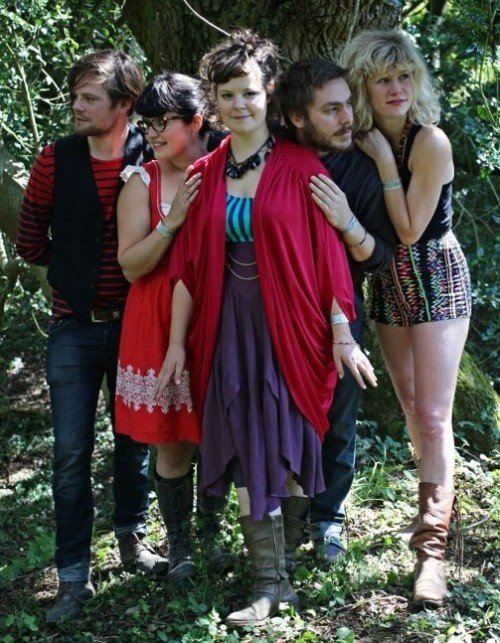 ‘Uca’s Dance’ is the incredible second single, from fiery neo-folk-rockers Moulettes, off their impressive album ‘The Bear’s Revenge’.
The band welcomed back ex-Moulette, Ted Dwane, now of Mumford & Sons to play on these sessions.

Moulettes’s songwriter, Hannah Miller conceived ‘Uca’s Dance’ when she was a music-workshop leader at the Most Mira (meaning Peace Bridge) children’s festival in the Prijedor region of Bosnia in 2009.

The aim of the festival was inspire artistic creativity in the young participants and build lasting bonds in their community.

One night a Romanian fire-dancer, Uca, who was also working with the children, performed a dazzling impromptu dance, and Hannah spontaneously improvised an accompaniment. The song was born.

But, as with much of Miller’s work, reality blurs into fantastical fiction. In Moulettes myth-making Uca becomes an imprisoned fire-dancer in a circus of cruelty. A dancing bear is a fellow captive.

The good-hearted Uca helps the bear escape in a denouement of fire, blood and flight, quite literally, in a hot-air balloon: hence The Bear’s Revenge.

Hannah is working on an illustrated book which extends the universe of her songs.
‘Uca’s Dance’ is released on November 5th.
Check their Autumn tour dates:
moulettes.co.uk/
facebook.com/Moulettes
Photo by Chris Sheffield