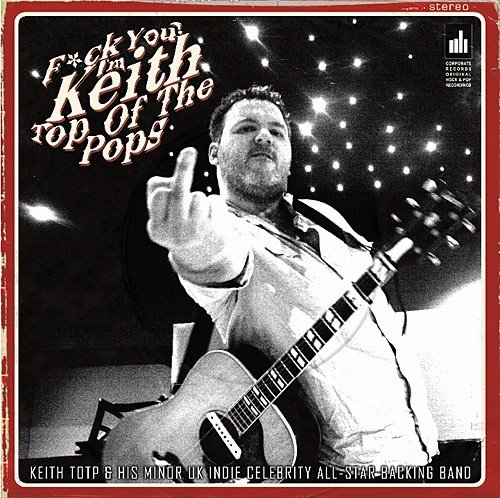 The band live by two rules – no rehearsals and no soundchecks – to ensure that every song they play sounds different every time. This novel approach is applied to the track listing on F*ck You! I’m Keith Top Of The Pops, as they were arranged based on the songs’ first ever performance.

Keith has also attracted a fantastic line up of musicians to record alongside him, including Dyan Valdes of The Blood Arm, Fruitbat and Jimbob from Carter USM, Keith Murray and Chris Cain from We Are Scientists and Ian Catstiltskin, Eddie Argos and Jasper Future from Art Brut.

As a result, the sound is a collection of wonderfully chaotic freeform rock tunes that sound like a cross between The Fall and Half Man Half Biscuit, with more bitter and twisted undertones.

With an album tour due in September, Keith Top Of The Pops & His Minor UK Indie Celebrity All-Star Backing Band, are sure to ruffle some feathers in the UK Indie music scene.
myspace.com/itskeithtotp