Due to their gloriously unpredictable live show, HOODLUMS issue a statement of intent with the June 13th release of their debut single ‘Landmarks’ via Blow The Whistle Recordings. 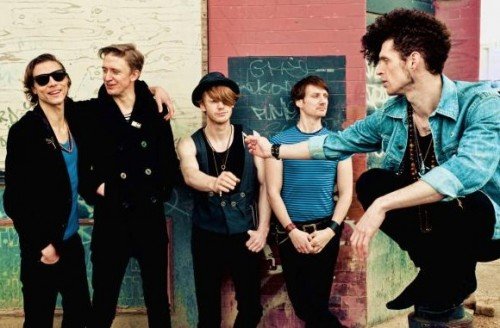 Originating from Southend, the London-based band first attracted attention when they were invited to open for Suede on the Britpop kings’ intimate comeback shows at London’s 100 Club and The Ritz in Manchester.

From there HOODLUMS attacked the summer festival circuit with relish, performing at the 2010 Hop Farm Festival, three sets at Secret Garden Party and at Rockness where frontman Lou Vainglorious took a songwriting masterclass from Blondie’s Chris Stein.

By the time 2010 had drawn to a close, the band’s subsequent accomplishments included airplay courtesy of Lamacq and Robinson, three-sold out London shows (at Cargo and two nights at The Lexington), and saw their track ‘Not A Love Song’ feature on Fierce Panda’s new talent EP ‘Zip It Up’, HOODLUMS then embarked on writing and recording new material at London’s famous RAK Studios & Leeders Farm in rural Norfolk

The debut single from these sessions ‘Landmarks’ is an indie-pop track at heart that is delivered with classic-pop sensibilities. As Lou describes “Landmarks says a lot about the band, but not everything…it’s a simple song with a simple sentiment..its about the anxiety we all feel waiting for our time to come..the sadness of manhood and the moments of joy”

Operating under a motif of “Songs for the Outsiders, The forgotten sons and daughters”, HOODLUMS – completed by Nick Pini (double bass), Tino Kolarides (guitar), Henry Tyler (drums) and Oli Wennick (piano) – are immediately accessible, mixing influences from Echo & The Bunnymen, with a smidgeon of The Verve and a touch of The Cure into their bold new sound. Their debut single ‘Landmarks’ along with B-side ‘The Great Outsiders’ is set for physical and digital release on June 13th via Blow The Whistle Recordings.