The new single Rain by Groucutt & Haynes includes a live version of â€˜Lifeâ€™ as a b-side. 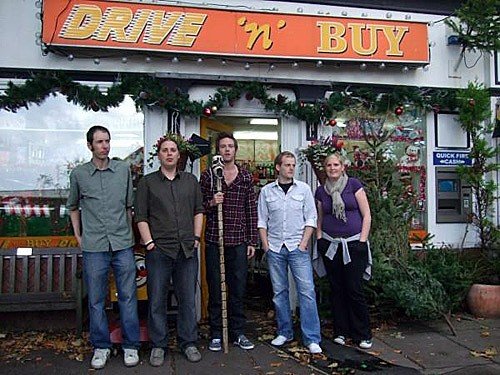 Both Robin Groucutt and Dan Haynes wanted to break away from previous singer-songwriter backgrounds so formed the duo in September 2008.

With a full band show, full of harmonies, with flashes of saxophone, flute, ukulele and even a mysterious didgeridoo player, the pair certainly managed to for fill their ambition.

Late in 2008 the first collaborative G&H effort hit the airwaves in the form of â€˜Stungâ€™.

Being played on local radio the folk rock duoâ€™s music was being likened to Jack Johnson and describe as sounding like a modern day version of Simon and Garfunkel, a hugely over whelming label for a small independent duo from Stourbridge.

With the name beginning to grow Groucutt and Haynes were asked to play acoustic supports for the likes of Richie Havens, Elkie Brooks, Midge Ure as well as midlands blues legend Ian Parker.

Slots on festival stages would follow the release with one highlight being the famous Shropshire festival, Farmer Philâ€™s.

An hour long set played to a warm and appreciative Farmer Philâ€™s crowed would not only see the single played alongside live favourites such as the new single â€˜Rainâ€™ and â€˜High On The Timeâ€™ but, would also see Mr Minar take centre stage for the first time armed with his didgeridoo.

More recognition of the ability of G&H came through them being short listed to the final 9 bands in the 2009 â€˜Hollyoaks Unsignedâ€™ competition.

After a day of filming on the set of Hollyoaks they made their first TV appearance, as the full band, on channel 4 in October 2009.

Along side all of this Groucutt and Haynes were busy behind the scenes recording and planning the release of their debut album â€˜Another Good Reasonâ€™. On September 30th 2009 G&H independently released this album.

Throughout 2010 Groucutt and Haynes became a common name on many smaller festivals play lists and the debut album has become more widely known.

With a growing appreciation of the pairâ€™s writing ability they have been approached by independent film makers wanting to use there music. In September 2010 G&H recorded a song for a feature length film â€˜Inspector Drakeâ€™ with the song due to appear along side other Groucutt and Haynes material.
www.groucuttandhaynes.com
www.myspace.com/groucuttandhay