Goodluck Jonathan is a collective of five very different individuals gelled together by a mutual love and serious appreciation of music and a less serious though equally passionate love of rum, mocking the percussion section, and annoying the Nigerian President by misdirecting his Twitter traffic to their profile (plus other unmentionable exploits expected of a band their age). 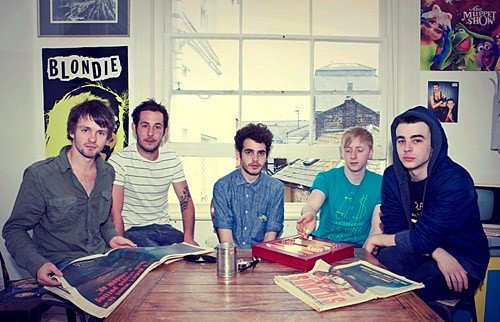 For Goodluck Jonathan wholeheartedly believe genres are a chain around a musicians neck and their aim is to “blur the lines between genres until they merge into one barrier between good music and shit music” –Goodluck Jonathan. Amen.

The mish-mash explains the audio rollercoaster ride of most of their songs. A fast, loud, slow, quiet, melodic, raucous, gentle, angry mix all rolled into each track.

But while passion brings Goodluck Jonathan together and no doubt makes the music as emotive as it is, it is the individual musicianship of each member that makes the band the strong, prolific beast it is.

For what could become an out of control noise explosion is channeled into finely honed, infectious tracks. Like Your Code Name Is: Milo, At The Drive In or And You Will Know Us By Our Trail of Dead, its loud, brilliant, but always organized chaos.

And surprisingly, due to keeping busy with the aforementioned secondary passions befitting of five energetic, social young men, Goodluck Jonathan meet only once a week to throw a few song ideas about in an explosive, creature fusion, before often dispersing and creating parts individually.

Reconvening to piece it all together and form the tight knit unit they are with musical parts that seamlessly fit together so perfectly it’s as if they’d rehearsed each twist and turn together in a darkened room day and night for months.

This dedication to creation and difference and progression led the band to release their music as three EPs, the ‘This Is Our Way Out’ trilogy.

As a new band, the EPs showcase their early development, the different entities to their sound – from angst post-rock, to the melodic almost Foals and Maccabees-esque intricacies and back again.

The three EPs will be put onto one album, also entitled ‘This Is Our Way Out’, and released on 11th July.

A split single including tracks ‘Broken Heart’ and ‘This Is Our Way Out’ will be released digitally in a package including two new accompanying videos on 30th May.