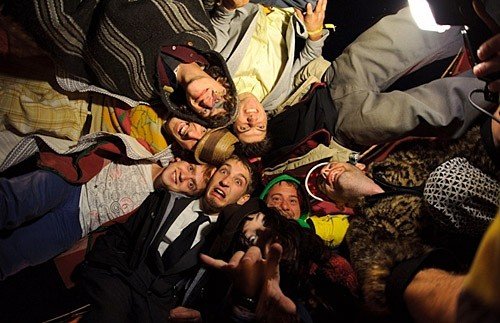 They were born in the early hours of 2007 by Noemie Ducimetiere, Elian and Cosmo, who within 3 months magnetised 6 more members – Vladimir, Vahakn, Bitelli, Orlando, Merlin and Rob to complete the circle and start a revolution.

Partly recorded in SARM Studios but primarily recorded in their own home-built studios, the band’s wish to maintain artistic control over their music and art along with a fair record deal led them into the arms of Emerging Species for their first release.

2011 brings much for Gentle Mystics. They have already been offered an exclusive sync deal for a feature film soundtrack and after a series of sold out club dates and massive festival shows the band has built a growing underground following.

This year they will be performing selected dates in the UK and pockets of the globe.
Gentle Mystics ‘Spiralling Breeze/Mushroom 30,000’ (Emerging Species )
out 06.06.11
gentlemystics.com
Gentle Mystics on itunes
emergingspecies.bandcamp.com