Check out Fast Years, a surf-pop/indie band from Brooklyn. Their exciting debut EP ‘Women’, is full of energy, punchy guitars and hook-laiden choruses.
We couldn’t resist the chance to ask them a few questions about their music and more…

Who are the band members and what do each of you do in the band?

What kind of music do you play?

We play a mix of punk, indie and surf pop. We write songs that get stuck in your head.
Where are you from?

We are based in Bushwick, Brooklyn.

Bill, Chris and I met through mutual friends in the Spring of 2011. We just started playing with Ken and Digo a few months ago.

We love the Ramones, The Sonics, The Exploding Hearts and The Vaccines just to name a few.

The hardest part is just getting your music out there. The Brooklyn scene is very supportive, but also very competitive.

There are so many bands to see every single night in New York City. So making sure people keep hearing your name is really important.

We were very lucky to get a lot of online support early on…NME really liked our single, “Young Heart.”

Our first show was opening for Howler in Brooklyn back in January. Since then we’ve be fortunate enough to play SXSW and the Northside Festival among others.

Now we’re not as nervous playing live and we’re really starting to find a groove.

What was the last gig you played, what you think of it?

Our last gig was a support slot at the Village Voice’s 4 Knots Music Festival in Manhattan. Loads of great bands were also on the bill, including The Drums and Bleached.

It was a perfect day to play the Seaport…and the backstage area was on a boat. Doesn’t get much better than that.

Well, playing SXSW was really exciting for us. We also just released our debut EP ‘Women’ on bandcamp, which we are all really proud of. 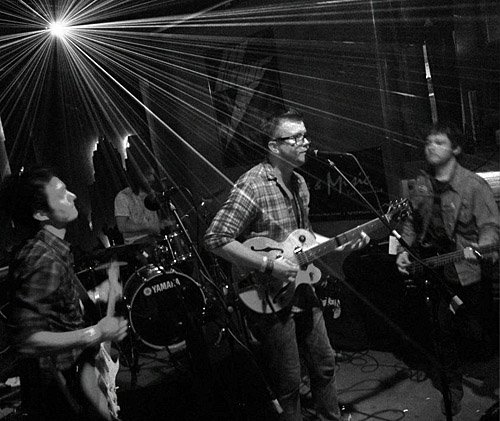 I think our friends have been very helpful, along with blogs both in the US and UK. We greatly appreciate all the support they’ve shown us so far.

A new music video for our next single off the EP. We are also writing songs for a full-length which we hope to release by the end of the year.

Is it hard being a new band in today’s music industry?

It is challenging. The public has so many choices today. So making sure that your name gets out there, whether its through playing shows, or simply word of mouth is crucial.

Being able to connect with people outside of your hometown is the biggest advantage.

Quick-fire questions:
Who’s the messiest in the band?

Who is hardest to live with on tour?

We are all pretty easy going at shows.

Who is the funny guy and why?

Haha, Digo and Chris. Those guys love to have fun.

Who moans the most?

Who is the most Rock ‘N’ Roll and why?

Digo. He likes to throw his guitar around on stage.

Who is the loudest?

Chris really pounds on those drums.

What’s the most embarrassing thing someone in the band has done?

Well, probably forgetting the words of our single ranks up there.

Who would you most like to collaborate with in the music industry?

We would love to work with Stephen Street on a track. He’s produced some of our favorite bands.

Also a tour with The Vaccines would be incredible.
Fast-Years on Facebook
By ©FAMEMAGAZINE.co.uk