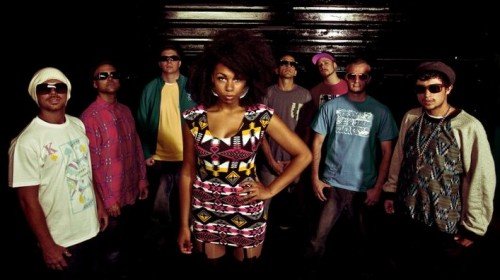 Since forming just two years ago, Bristol based Dub Mafia have become one of the most formidable acts in the UK dance scene and beyond.

The seven-piece band are synonymous with blending drum and bass, dub, dubstep, bashment, breakbeat and world music to create their own unique sound.

And, with a strict policy of ‘no backing tracks’ their live performances give an insight on how their signature style is created.

2012 sees Dub Mafia offer their debut double-A side single out as a free download in preparation for their highly anticipated debut album.

‘Danger’ shows off singer Eva Lazarus’ sensational vocal ability and individual style whilst displaying the bands polished production technique. The lyrics are infectious and the beats are engaging.

‘Breakneck’ brings liquid drum and bass firmly back into 2012 with a perfectly composed drum and synth marriage from the outset, speeding up to create a drop straight into snarling sub bass and almost trippy beats, this is one for the DJs to excite the dance floor with.