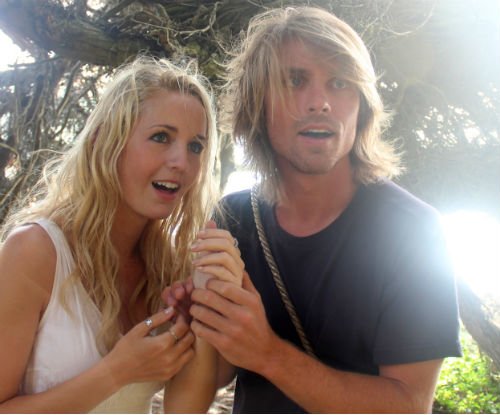 Excitingly quirky new folk duo from San Francisco, Dirty Little Blondes – Mark and Kendra – create tunes that make you smile. ‘Like This’ is their enchanting and lighthearted, modern classic, written in a van on the way to Vancouver where the Dirty Little Blondes met with Kurt Maas, who produced and recorded the new tune…

How did you form the duo and why did you did you decide to call the band Dirty Little Blondes?

We actually live about a half block from each other in San Francisco’s Lower Haight neighborhood. We were both at a neighborhood open mic (as solo acts), got to chatting and realized we were neighbors so we decided to eventually get together and play some music.

A few weeks passed until we finally got together, ate some salad and shared some songs. There was instant chemistry, completing our first song in the first couple of days. The next week we went back to the neighborhood open mic and performed together and the hosts asked us to be the feature act (a 30 minute set) in two weeks. So what was only a fun project had to get its act together quickly, quite literally.

The name came because everyone would always comment on how “California and blonde” we looked. Technically, we’re dirty blonde and then adding the “little” in there just makes it a bit more clever and cute. 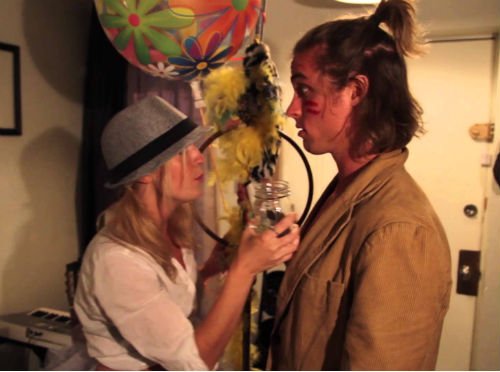 We had similar music styles and we have both always liked playing music with the opposite sex. It brings two different energies, two different styles, to different viewpoints. It’s really like two different instruments in a way.

It also doesn’t hurt that we live so close to each other so getting over the initial phase of ‘practice before you really have anything’ was a bit easier for us than if we had to drive across town.

Your new track ‘Like This’ was written in a van on the way to Vancouver …Please tell us more!

Both of us get antsy quickly and like to travel! To further give an example of that point, simply because we begin practicing the Death Cab For Cutie Song “I’ll Follow You Into The Dark” we spent the rest of our money on two, two month tickets to Thailand.

We leave September 22! The line “From Bangkok to Calgary” was just too much for our wanderlust to handle and seeing how we were already in Canada…

Right Canada, so, with no shows booked we borrowed Kendra’s parents mini van and took off on “tour” up the Pacific Northwest. We camped, slept in the back of the van, and stayed with friends. Playing shows on the street or in dive bars along the way – Portland, Seattle etc.

Our end destination was Vancouver, where Kendra had a good friend Kurt Maas, who offered to work with us on a track once we got there. Well, we have plenty of originals written that have yet to be recorded, but we wrote like this in a massive rainstorm somewhere in a forest near Umpqua Hot Springs (Aka the beautiful middle of nowhere Oregon) a few days before we arrived in Vancouver so we decided to go with the most recent song.

Oh anywhere really. We both have different styles, and usually one of us comes to the other with about 30% of the song written then we fill in the other 70% together. Sometimes song seem to “download” through us in seconds, other times it will take a few months to finish one song.

We could talk for hours on this subject but song writing is really just describing what is going on around you.

What’s the best and worst thing about being a duo?

Oh yeah. We have a few before we head out to Thailand. Also, once we are in Thailand we fully plan on becoming Thai rock stars for the two months we’re there. The blonde hair will at least make us unique.

Our live shows are theatrical and super lighthearted. We sometimes interact with out future selfs (a pre-recorded bit on an iphone), wear different costumes, tell funny stories and chat with the crowd. We think simply getting up there and playing music isn’t enough. We want to create an entire experience. Everything is theater.

We have a show September 9 at The Convent SF. It’s called Divine Acoustics and will be held in an old chapel with two other bands.
Then we also have a show at the mini SF dealership on September 18, because just today they fixed Kendra’s window and bought us a brand brew guitar after her car was broken into. They saw this silly video we made……and hooked us up! Thank you so much mini of San Francisco.

We also tend to play a lot of wine bars through out SF because we can really put some loving soothing music in the air for places like that.

Woo that’s hard. There are sooo many talented folks out there. We’re so lucky to already be working with a few rising stars in other fields – Michael Jacobs, Oliver Mellan, Steve Murr, Kurt Maas. However, we’re very open to finding an incredible stand-up bassist and a drummer. However, as for particulars…

We’d love to jump into that entire Lumineers, Edward Sharpe, Of Monsters and Men circle. Opening up for a band like that would be huge for us and I can only imagine the songwriting that would go on backstage/on the bus!

Beatles, Bob Dylan, Bright Eyes, Simon & Garfunkel, Alt-J. Really anyone folky and relaxing with solid songwriting skills and lyrics. We’re actually playing the show on the 9th with one of our favorite musicians Travis Puntarelli, but he is arguably less “famous” then we are.

When we have energy Kendra loves her dubstep, Mark prefers to dance to MJ.

Thailand trip! Where we plan to write a bunch more songs, upload quirky videos (songs and skits so be sure to subscribe to us on YouTube: youtube.com/user/dirtylittleblondes ), and push whatever else we already have out there on social media. Hopefully, when we get back on November 24, we’ll have a studio all lined up for our first full-length album.