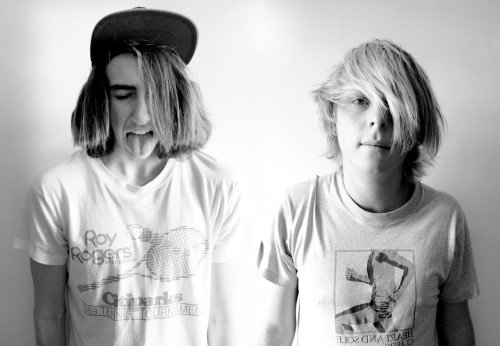 Bleeding Knees Club – Teenage Girls (Official Video) from I OH YOU on Vimeo.

If ever there was a Club to sign up to, it’s the one spearheaded by rip-roaring, party-hardy duo Jordan Malane and Alex Wall.

An irrepressible garage-pop ‘n’ surf-punk pair that burst out of Australia’s Gold Coast in early 2011, Bleeding Knees Club have won hearts and minds through a reckless live reputation and, on the recorded front, with a swag of super-catchy demos which quickly found champions beyond Australia’s borders. The debut UK single, Have Fun, was released on the Noir label this summer and quickly struck a chord with UK tastemakers.

The upcoming record, Nothing To Do, encapsulates everything that’s making people fall in love with Bleeding Knees Club: it’s a raw ‘n’ urgent set of super-fun songs about girls, getting high, and sticking it to The Man. The album was mixed in the UK by Dan Grech-Marguerat (The Vaccines, Chew Lips, Kaiser Chiefs).

They are now back in the US where they will perform a run of dates on the east and west coast, including several at CMJ, to promote the release of debut US EP, Virginity, which is led by the forthcoming UK single, Teenage Girls, the first track to be lifted from their forthcoming album.