Dark, enigmatic, beautiful and unique, Australian native Belle Phoenix is a singer, songwriter and aspiring poet and she arrives kicking and screaming onto the UK music scene like a desperately needed shot in the arm – an anti-dote to the current epidemic of bland & sterile female pop stars infecting our airwaves, TV screens, magazines and daily lives with safe, middle of the road personality free drivel. 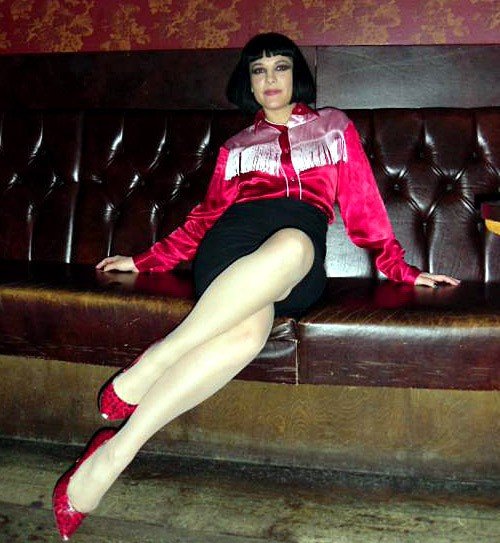 Likened in spirit to PJ Harvey, Johnny Cash and The Sex Pistols, Belle’s spaghetti western stylized rhetoric on her new album Nine Lives deals passionately in tales of love, death, irony and humour all wrapped up in a sexually deviant package of artistic expression and creative conviction.

As a child Belle was brought up on a steady diet of choice cuts borrowed from her parent’s diverse record collection and it was this early influence from her discovery of artists like Jimi Hendrix, The Doors, Bob Dylan and The Rolling Stones that she was inspired to teach herself guitar in an attempt to imitate her heroes.

As her love affair with music steadily grew, it was the punk movement above all others that seemed to call out loudest and indulging in albums by The Clash, The Ramones, The Cure and Joy Division shaped the future path she would take in her own music.
A period of time spent squatting in a band rehearsal studio (that doubled up as punk commune) whilst dabbling in heavy use of drink & drugs as a typical teenage punk loving rebel bought her into contact with real gigging musicians on a daily basis.

Waking up on the studio floor day after day as band members dragged amps and equipment around her inspired Belle to drop out of school, head first to Melbourne and then to Brisbane trying to form a band around her vocal talents and developing song writing ability.

A brief stint in LA followed before a return to Sydney bought about a record deal with Warner/Chappell but bad luck was to follow as the label folded just after the first single was released to radio.

Determined to carry on, and stick one to her over protective producer/manager, Belle took 10 demos of her own material and fled to New York where she started to record an album with producer Mark Plati (David Bowie, The Cure, Robbie Williams).

“It was the middle of winter 2007 and going from 40 degrees Celsius to – 30 was tough and also invigorating as I felt I was finally honouring myself and my expression without having someone forcing me into a mold.”

Inspired by stories of war, child sex trafficking and meditation (Belle spent time as part of a Sikh cult) the album The Glorious Dead was born and Belle was able to form a band, move out of the Aussie run hostel she had been staying after spending all her money on recording and tour across Australia, Germany and the UK (playing to 20,000 people at the ROX festival main stage) before arriving in London after successfully applying for a Finnish passport (her father was from Finland).

Now settled in Camden, and with a brand new backing band formed in the UK, Belle is readying her next collection of twisted, schizophrenic & eccentrically brilliant personal notes to a nation of lost souls.

Nine Lives is a wonderfully imagined record, the kind of record Quentin Tarentino might well use to serenade Karen O or Patti Smith to join him for a perfectly choreographed foxtrot during an Andy Warhol hosted party at The Factory .

Sinister in its melody yet disarming in its projected innocence, more than anything â€˜Nine Livesâ€™ is a breathtaking confessional journey into the very depths of a troubled but gifted musical soul.

Belle Phoenix is set to be one of 2011’s most exciting breakthrough artists her debut UK album Nine Lives is released on Monday April 4th 2011 through Old Crow Misery Records.
www.myspace.com/bellephoenixmusic
www.bellephoenix.com