Airship release their new single, Kids, through Play It Again Sam on the 13th June 2011. It is taken from their forthcoming debut album, ‘Stuck In This Ocean’ due out in the Autumn. 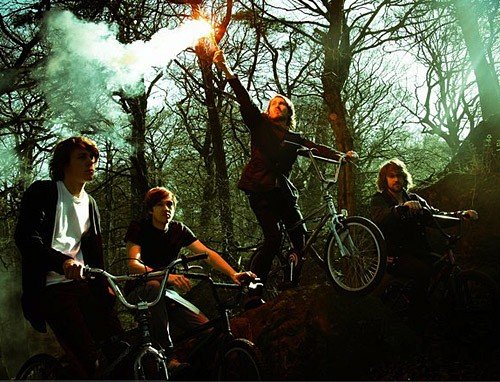 Kids is Airship’s first single proper and although the band are adamant that the album should be listened to as a whole body of work, there is no denying that the propulsive rhythms and explosive chorus is an exciting, urgent introduction to this young gang.

It’ll come as a surprise to many who believe that bands still exist in a whirlwind of instant hype, but it’s still possible to develop outside the spotlight.Since forming in 2008, Manchester four-piece Airship have notched up acclaimed support tours with Editors, Biffy Clyro, The Joy Formidable and Frightened Rabbit.

A self-released EP last year received rave reviews, but such was their resilience to stay in the shadows until fully ready, that the band hit their city bunker and refused to re-surface until an album’s worth of material was readied.

Their determination to succeed in the right way has paid off with debut album, ‘Stuck In This Ocean’ receiving its finishing touches now.

Still with an average age of just 22, the quartet’s sound has progressed from an already remarkable start, their songs becoming more direct and their sound ever more open and ambitious from constant touring.

‘Stuck In This Ocean’ was made with Doves/Cherry Ghost producer Dan Austin in a total of just 15 days at Rockfield Studios in Monmouth and Moles in Bath.
www.airshipband.com
www.facebook.com/Airshipband