Dance act Faithless and Fiat marked the launch of their groundbreaking creative collaboration with a projection of Faithless new video Feelin Good onto London landmarks including the National Film Theatre and Royal Festival Hall. 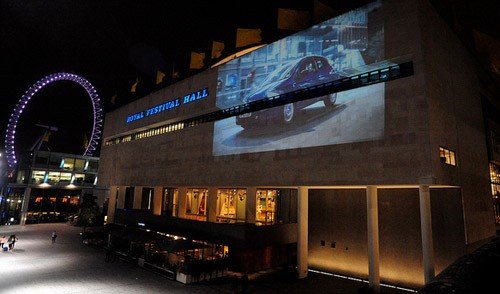 The team behind TV’s first prommercial transformed the Southbank into a pop-up billboard while a surprised audience gathered along the Thames.

This is only the second time the Faithless video has been seen in its entirety by the public following the premiere on Channel 4 last weekend.

The three-minute video was played on a loop while the sun set on London’s skyline. 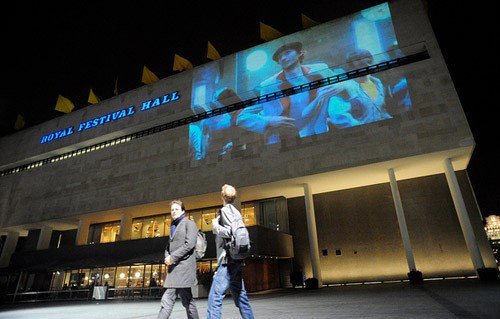 The video’s plot follows the extraordinary night of a young man and woman, whose incredible dance moves begin to attract the attention of fellow clubbers.

It soon becomes apparent that the dancers moves are being directly affected by the movements of stylised dolls in the form of Maxi Jazz and Sister Bliss, hanging from the rear view mirrors of separate Fiat Punto Evos.

As the cars navigate the dark city streets the dolls movements become more erratic and our dancers moves even more unbelievable.

Inspired by the track’s lyrics, performed by Dido and Maxi Jazz, the video follows our dancers as they are awakened and energised by the cars’ journey through the city.
Faithless — Feelin Good — Fiat and Faithless Present
Fiat recently broke new ground by releasing the world’s first prommercial – a hybrid of promotional video and TV commercial which can now be seen nationwide until 12th September.

Faithless said:
“We’re always looking at new ways to get our music to different audiences and exploring new ideas.”

Elena Bernardelli, marketing director, Fiat Group Automobiles UK and Ireland said:
“This collaboration was all about getting the Punto Evo and the Feelin Good track out to a wider audience, so projecting the video onto buildings in London where everyone and anyone can see it, seemed like a natural progression for the campaign.

The video is really fun and uplifting so we’re hoping itâ€™ll give people that feel good feeling as they pass by.”
evomusicrooms.com
myspace.com/faithless
faithless.co.uk
Photos by © Lawrence Watson