Stars and showbiz guests toasted the glittering Premier of Sex and the City with SKYY vodka cocktails at the glamorous after party at Billingsgate serenaded by Sugababes Keisha, Heidi and Amelle. 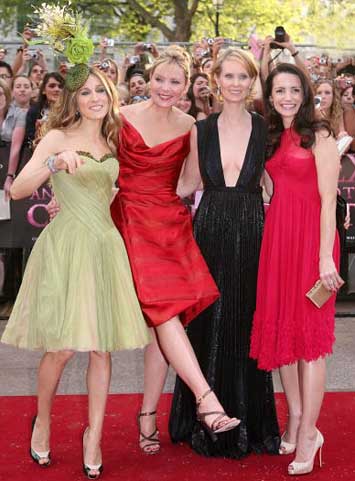 To celebrate the release of the film SKYY has created five great cocktails to
capture the bewitching and fun-loving personalities of Carrie, Miranda, Charlotte and Samantha. And not forgetting Mr Big. Each cocktail is named after one of the stars of the famous TV series.

Carrie is a cocktail to make you kick off your Jimmy Chooâ€™s in a fun evening with the girls:
50ml SKYY Berry vodka
25ml Grand Marnier
10ml Lime Juice
Shake with ice and strain into a chilled Martini glass
Garnish with berry fruits

Charlotteâ€™s cocktail is imaginative, artistic and well-balanced:
Crush 12 mint leaves with sugar or sugar syrup
and a quartered lime
In a tall glass
Add 50ml SKYY Vanilla vodka
Top up glass with crushed ice. Garnish with a sprig of mint

Samantha is adventurous and very fun loving; a chance to explore your wild side:
35ml SKYY vodka
25ml tequila
15ml sugar syrup
25ml freshly squeezed lime juice
Shake with ice and strain into a chilled Martini glass.
Rim glass with a mix of salt and pepper

Katie Warner, SKYY vodka Marketing Manager, says: â€œWhat a fantastic night for fans of Sex and the City. Now we can capture the glamour of Carrie, Miranda, Charlotte and Samantha with these great SKYY cocktails.â€

SKYY vodka is remarkable for its exceptionally clean taste due to the high quality quadruple distillation and triple filtration process which puts this exceptional vodka from the United Stares among the top four biggest selling vodka brands worldwide.
skyy.com