EMMERDALE star Chastity Dingle took the train to Cultra ahead of the Emmerdale Extravaganza on Saturday June 7. Lucy Pargeter, who plays the feisty vet receptionist in the hit ITV soap, rode the rails to encourage people going to the event at the Ulster Folk & Transport Museum to make use of the extra public transport available as there will be no visitor parking.

The Emmerdale actress can’t wait to meet all the Northern Ireland fans at the Extravaganza.

She said: “I didn’t realise how big Emmerdale was in Northern Ireland.
“I started doing some PAs over here last year and it’s astonishing. We get recognised more over here than we do back in Leeds it’s fantastic and everyone seems to love the show. I’m so glad it’s over here this year”. 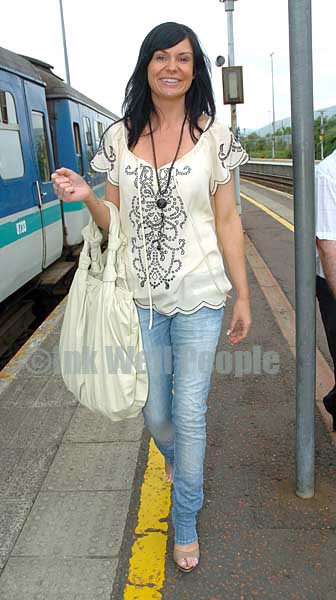 The Extravaganza, organised by Scottish company George Walker Events, will see a cast of 35 Emmerdale stars get involved in a variety of events at the Ulster Folk & Transport Museum, followed by a glitzy dinner dance at the Culloden Hotel. The charity events include Emmerdale Goes Loopy – which sees people being able to raise sponsorship to learn how to fly – a 5 km run, an abseil and 5-aside football and golf.

Lucy is a self-confessed adrenaline junkie and is taking part in three of the charity events.

“I’m going to be doing the abseil, the army cook-off and I want to do the Emmerdale Goes Loopy challenge, I desperately want to do that one”, she said.

“Anything to do with speed or adrenaline or that fear factor. I like cooking and I like army men as well so that combines the two”.

The Emmerdale Extravaganza aims to raise much needed funds for the Anthony Nolan Trust, which takes back lives from leukaemia by managing and recruiting new donors to the UKâ€™s most successful bone marrow register as well as undertaking vital research leading to improvements in the effectiveness and safety of bone marrow transplants.

The Emmerdale event has been running for the seven years and was previously held in Aberdeen.

“The Extravaganza is really important to us, The Anthony Nolan Trust is a charity that’s close to a few hearts in the cast”, said Lucy.
“It’s very important to raise awareness most of all, including money.

“It’s been in Aberdeen before but it’s fantastic to be in Belfast and do it over here for a change. We’re hitting a whole group of new people who will be informed about the Anthony Nolan Trust and it’ll be good craic for us as well.

“There’s loads of things to see, there’s a chance to meet up with the cast, we’ll be around all day, so if people want to ask all those questions they never got to ask and see us in real life without being our characters.

“Get involved, raise some money and have a good day out with the family”.

Translink, official sponsors of the Emmerdale Extravaganza, are putting on extra transport including the Emmerdale Express, to take families to the event at the County Down tourist venue as there is no parking.

Lynda Shannon Communication Manager at Translink said: “We are proud sponsors of the Emmerdale Extravaganza, aimed at raising money for The Anthony Nolan Trust, Taking back lives from Leukaemia.

“For a more comfortable, stress free journey, to this fun filled event choose public transport Translink has teamed up with the Ulster Folk and Transport Museum to offer spectators a variety of different cost-effective and convenient ways to travel to the event”.

“As well as the trains and regular Translink bus service, there will be a Park and Ride facility at Holywood Exchange. Because of the onsite activities we are limiting car parking spaces at the museum on the day to disability badge holders only”.

To book tickets or to register for the events log onto georgewalkerevents.co.uk or call 01506655361.
By Tina Calder
Photos by Fabrizio Belluschi / Ink Well People
Â©Ink Well People