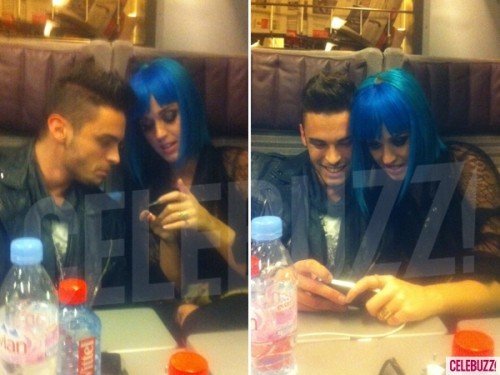 Katy Perry cuddled up to Chanel model Baptiste Giabiconi during a private dinner aboard the EuroStar train from London to Paris on March 19 — and only Celebuzz has the world exclusive photos.

In a move that is bound to spark further talk about a hot new romance, the pair gazed over a cell phone during the two hour trip on the high-speed railway service between the two cities.

Katy looked smitten as she smiled and touched hands with the muscular model, who has been the face of Chanel since 2008, when Karl Lagerfeld proclaimed him as his muse.

The pair also whispered to each other and chatted with friends who were travelling as part of their entourage.

“They very much looked like a couple,” the onlooker told Celebuzz.

The dinner date came 14 months after Baptiste admitted in an interview: “If I could make her (Katy) divorce her husband, I’d marry her.”

She recently wrapped a 124-show world tour in support of her third studio album, “Teenage Dream.”
Exclusive photos by Celebuzz.com