BELFAST actor Gerard McCarthy was out in force this week with his co-stars to drum up votes for the 2008 British Soap Awards.


And in an attempt to prove they want to win Gerard will be joined by the whole Hollyoaks cast tomorrow (SATURDAY) at the ceremony at BBC Television Centre in London.

The show is nominated in most of the categories and are hoping to top their three wins last year when they scooped Best Villian, Best Comedy Performance and Sexiest Female. 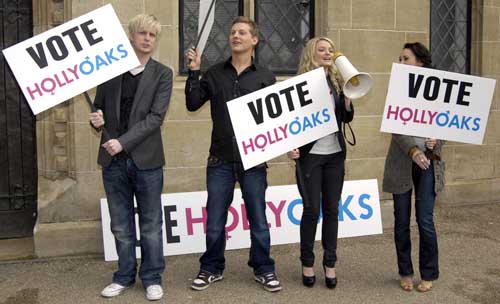 Gerard, an award-winning actor himself said: â€œPeople can vote right up until 3pm on Saturday so we thought it might be a novel idea to see if we can get the last minute rush to help us along.

â€œApart from that it was a laugh and we all thought it would be a good way to show the fans that we appreciate it when they do vote for us in these types of awards.â€

Earlier this week the Hollyoaks actors appeared on Hollyoaks Day on This Morning with Fearne Britton and John Barrowman where they took the opportunity to â€œunashamablyâ€ ask the viewers for their votes.

Gerard added: â€œThe good thing about Hollyoaks is that weâ€™re a very young cast, people donâ€™t think itâ€™s sad that we are blatantly asking for votes.

â€œAt the end of the day itâ€™s fun to win awards and celebrate after the ceremony and at Hollyoaks weâ€™re all about the partyingâ€.

phones4u.co.uk are proud to announce that they are now sponsoring hollyoaks, check out their site for more information.