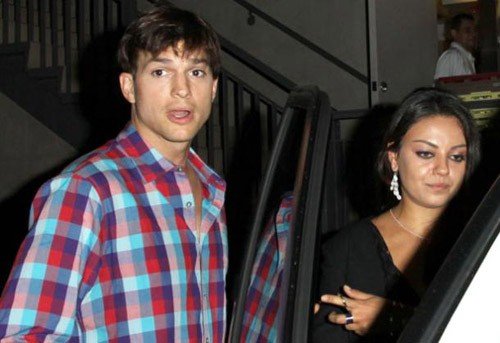 The nice people at Hollyscoop have exclusive details on Ashton Kutcher and Mila Kunis, together…

The two “70’s Show” alums were photographed together Thursday night as they were leaving the wrap party for Ashton’s film, ‘Jobs.’

An eyewitness at the party tells Hollyscoop that Ashton and Mila “arrived as a couple and left as a couple.”

The soiree that hosted around 300 guests was in Los Angeles at The Duplex on Third Restaurant.

“They stayed within five feet of each other the whole entire evening. It was very obvious to everyone that they were together.”

The source says Ashton and Mila “were really cute together” behaving in a “casually affectionate” sort of manner.

“They both seemed in good spirits, happy and having fun,” says the source, adding “They just sat next to each other and mainly talked to each other the whole time they were there.”

Despite their reported recent allegiance to their ex-stepfather, Demi Moore’s daughters apparently weren’t on the guest list.

Not that Demi might even care at this point… she’s pursuing other interests. Young, hot, heavily accented ones.
For the full story go to Hollyscoop.com