TEENAGERSINTOKO release their debut album â€˜Sacrificeâ€™ and single â€˜End It Tonightâ€™ through Back Yard Recordings (Chromeo, The Gossip) on May 24th. 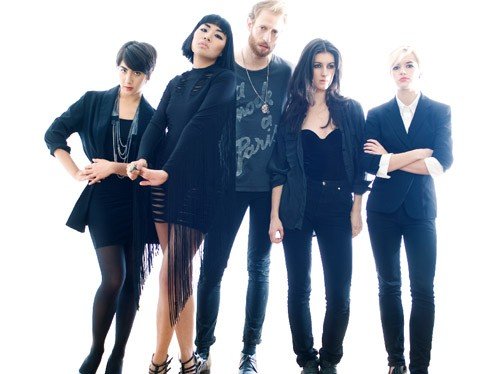 The record draws together the most exciting subterranean music of the past thirty years…. with sinister, crawling synths marry pulsing rhythms and screaming guitars.

The band have come a long way since their early beginnings- from playing The Great Escape, selling out venues across the UK, bagging support from the likes of Zane Lowe, XFM and the NME; and most recently topping the Hype Machine chart with The Horrors remix of â€˜Peter Panâ€™!
www.myspace.com/teenagersintokyo

WHO ARE THE BAND MEMBERS AND WHAT DO EACH OF YOU DO IN THE BAND?
Samantha Lim: Vocals
Miska Mandic: Keyboard
Linda Marigliano: Bass
Sophie McGinn: Guitar
Rudy Udovich: Drums

WHAT KIND OF MUSIC DO YOU MAKE / PLAY ?
Dark Pop

WHERE ARE YOU FROM ?
From Sydney, currently living in London

HOW DID YOU GUYS GET TOGETHER AND WHEN?
We’ve all known each other for many many years before we started the band. It was born out of our collective love of music and during a time in Sydney when the music scene was going though a growth period. Everyone around us was creating exciting music and we got swept up in it. Our friends were very encouraging and it was a great time for independent bands and audiences because there was so much going on in terms of gigs to play as well as going to see other bands play.

WHO ARE YOUR INFLUENCES IN THE MUSIC INDUSTRY ?
Being a five piece our influences are as extensive as they are varied. Some of them include Fleetwood Mac, Talking Heads, The Cure, Prince, Grace Jones, The Knife, Depeche Mode, Nirvana, Sonic Youth, Crowded House, Tears for Fears, The Beatles…we really could go on all day with this list.

WHAT HAS BEEN THE HARDEST PART OF BEING IN THE BAND FOR YOU ?
Definitely the hardest part is trying survive financially. The toughest times have been when we’ve all been working full-time day jobs and trying to rehearse, tour and have private lives around that. It’s often impossible for most independent artists to live only on the money you make from record sales or even touring. It’s a lot harder than most people think and you do it because you love it, but it would be great if there was more support for musicians. There was an interesting article on Pitchfork recently comparing the support that Swedish and Canadian artists get from their governments with other countries. It was really insightful to see the systems they’ve implemented to help make it easier for artists to focus on what they do best.

TELL US A BIT ABOUT YOUR EARLY DAYS AND HOW THEY DIFFER FROM NOW ?
When we first started we did pretty much everything ourselves. From managing the band to booking shows to artwork to releasing our EP in Australia – we did it all. We’re still very involved with all aspects of the band, but over time we’ve been really fortunate to have amazing people come on board to be a part of the teenagersintokyo team.

WHAT WAS THE LAST GIG YOU PLAYED, WHAT DID YOU THINK OF IT ?
Last week we played in Newcastle in the UK. We played in this venue called Offshore 44. The interior has this nautical cavern vibe, with very dim lighting, wooden beams and lots of old sea-oriented paraphernalia. The back wall of the stage is apparently the original castle wall where people’s bodies were hung after they were beheaded. It’s definitely on the spooky side and they say it’s haunted too. Not sure if that had any impact on the show, but I walked away with a splinter, two broken nails and a bleeding foot from having dropped a floor tom on it.

HAVE YOU ANY FORTHCOMING GIGS IN IRELAND OR NORTHERN IRELAND ? IF SO ARE YOU LOOKING FORWARD TO THEM AND WHY ?
We’ll be coming on June 4th to play No Disco at Crawldaddy in Dublin. This will be our first trip to Ireland so we are very much looking forward to it. We’ve got a few Irish friends always raving about Ireland so hopefully we’ve got some free time to explore more than just the venue.

DO ANY OF THE BAND HAVE ANY IRISH OR NORTHERN IRISH CONNECTIONS ? IF SO TELL US ABOUT THEM ?
Sorry, not that we know of…

WHATâ€™S THE MOST SUCCESSFUL THING YOU GUYS HAVE DONE TO DATE ?
Releasing our debut album. For some artists it can take them years and years till they are able to release their album, so we’re really proud and humbled to have been able to have worked with an amazing producer like David Kosten and to have the album come out internationally.

WHO HAS HELPED YOU THE MOST GET TO WHERE YOU ARE TODAY ?
I think it would be hard to select just one person as there have been so many significant people along the way. In the interests of being diplomatic we’d have to say everyone around us – our families, our partners, our friends, our team and our fans. Without all these people we wouldn’t be able to do what we do.

WHATâ€™S COMING NEXT FOR THE BAND ?
The album will be out in May in the UK and then later in the year in Europe. Our tour schedule is packed for the next couple of months so we are looking forward to living out of suitcases for the next little while.

IS IT HARD BEING A NEW BAND IN TODAYâ€™S INDUSTRY ?
From what I’ve heard/read about the industry back in the glory days of the big spending major labels, I would say that it is harder now for bands. You can’t just write some songs and sit around waiting for the cash to roll in, you need to be active in getting the music out there and touring. And the further you go the harder you need to work and push yourself. It’s also an interesting period with the internet allowing artists to bypass the middleman and have a direct connection with their fans. In some ways it’s made things easier.

HOW IMPORTANT IS THE INTERNET AND SOCIAL NETWORK SITES TO THE SUCCESS OF YOUR BAND ?
Personally, I have a background working in media, specifically social networking, so I’m a bit of an internet geek. We recognise the importance of the internet in order to easily connect with audiences, but at the same time the two feed off each other. it’s a combination of the music and the live show that help builds your online presence. It’s something that we are aware of but not to the extent that we force ourselves to do things for the sake of doing them. Everything on our blog, website, myspace, facebook etc is there because we chose to put it there. We do all the design, content and the behind the scenes videos ourselves.

QUICK-FIRE QUESTIONS:
– WHOâ€™S THE MESSIEST IN THE BAND?
We’re all pretty messy in our own ways.
– WHO IS HARDEST TO LIVE WITH ON TOUR?
I can’t answer this, we’re about to go on tour. Are you trying to make life difficult for me?!
– WHO IS THE JOKER AND WHY ?
Rudy is the prankster. Although Linda comes out with some totally random lols quite often.
– WHO MOANS THE MOST ?
No one. We all moan in equal measure.
– WHO IS THE MOST ROCK â€˜Nâ€™ ROLL & WHY ?
Miska has the longest hair, does that count?
– WHO IS THE LOUDEST ?
Rudy
– WHO IS THE MOST ANNOYING ?
Seriously are you trying to start an inter-band war?
– WHATâ€™S THE MOST EMBARRASSING THING SOMEONE IN THE BAND HAS DONE ?
Too many things to note
– WHO WOULD YOU MOST LIKE TO COLLABORATE WITH IN THE INDUSTRY ?
The Knife or David Lynch
– WHO WOULD YOU MOST LIKE TO COLLABORATE WITH IN IRELAND OR NORTHERN IRELAND AND WHY ?
Kevin Shields from My Bloody Valentine. I think he could really bring some magical vibes into the mix. I’m a big lover of dreamy guitar sounds and layers of reverb.
www.myspace.com/teenagersintokyo
Â©FAMEmagazine.co.uk