Whether you’ve got 100 mil in your bank account, or just $1, it seems that nobody is above winning some easy, even though unlikely, cash. Yes, I’m talking about people who play powerball in hopes of winning it big.

You’ve probably seen enormous numbers people have won, like the largest jackpot ever which was drawn just in the beginning of this year (2016). The amount? Well, just $1.586 billion. Okay, actually that’s not entirely true, it was split three-ways, so each got $528.8 mil and considering many people choose the cash option (one lump sum instead of monthly/yearly payments) when taking the money, they are left with anywhere between one third to half of it.

But such huge (or if you ask Bill Gates, maybe not so huge) payouts get even the rich and famous to the playground. Celebrities like Kim Kardashian West, best known for her behind, has asked people on her twitter page – “Who got powerball tickets???” – allegedly she didn’t buy anything herself, but with her net worth being below around $100 mil, she probably did.

Former MTV reality star Heidi Montag and her husband, after squandering their $10 million fortune, also hoped to be the ones to win the January’s jackpot. 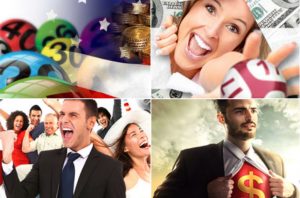 “Jersey Shore” star Snooki has also been among the people promoting their lottery ticket buy. Jessica Simpson said that “I jumped into the Powerball the other night, I didn’t win! I’m normally pretty lucky at the lottery, but I don’t know, I always ask like do rich people even win the lottery?”

Even the presidential nominee Hillary Clinton bought a ticket in January saying that if she won, she’d fund her campaign with it. Well, obviously that didn’t happen, but I wonder if the actual winners did donate to her campaign, or maybe the 8-year-old bully’s campaign instead.

One way or another, it seems nobody is above trying to make some easy dough, and why should they be.

The chances of winning are far from good, especially in case of huge jackpot lotteries like Powerball or Mega Millions. When thinking of the chances, think of something like 1:292,201,338.

It has been said that the odds of winning such a jackpot are lower than the ones of getting hit buy a car while walking to buy the lottery ticket on a rainy day. Or something like that. But, the latter has happened. So why not give it a shot.