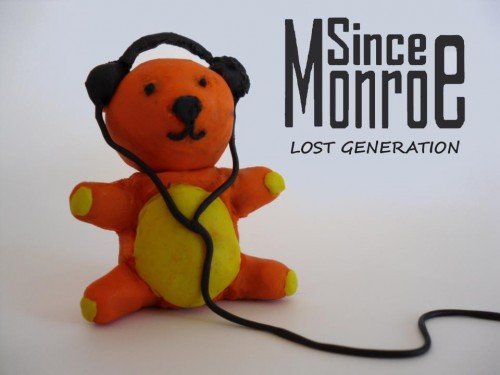 Taking their influences from Nirvana, The Foo Fighters and Weezer, Birmingham-based Since Monroe have released their debut LP, ‘Lost Generation’, and will be going on tour to back up the release.

Starting back in 2011, Since Monroe (consisting of Andy Clifford, James Bradley and Rich and Matt Tregortha) have been bringing back grunge music, with a hint of pop thrown in for good measure.

‘Lost Generation’ kicks off with ‘DJ’, a fast paced anthem that is guaranteed to get everyone on the dancefloor.

This definitely exerts a large Foo Fighters influence, perhaps combined with that of the most recent Lost Prophets material. The track is catchy and danceable, a very good start to the EP.

With the fast paced drumming and searing guitar riffs, you could just imagine a moody teenage stamping around and slamming doors, this image added to by the lyric “Leave me alone, just do as you’re told.” Something I hear frequently from my younger brother… Another danceable track.

The third song introduces us to the title track, “Lost Generation”.

The song starts off with a busy drum beat, to make way for another fantastic anthem.

‘Lost Generation’ shouts out the longing of young people to break away from the mainstream, making them the main focus of the song.

I can definitely hear the grungy roots bursting through on this one, making it my favourite so far.

The Foo Fighters influence can definitely be heard here. The upbeat tempo and infectious guitars will no doubt help this track go down a treat at festivals and on the bands forthcoming tour.

All in all, a very good EP. ‘Since Monroe’ are definitely making grunge more mainstream, and will no doubt appeal to the mass audience they long to please.
facebook.com/sincemonroe
By Livy Kerr