In an era of band soup, itâ€™s refreshing to be confronted by a band so different to everything else, so riddled with inconsistencies. I was a cub scout manage the feat of being both indie and rock, punk and prog, small (thereâ€™s only two of them) and big (theyâ€™ve a sound to fill arenas). And yes, a little bit Emo. I Was A Cub Scout are not afraid to admit theyâ€™re proud of their roots, and they want to be Britainâ€™s most successful emo band. 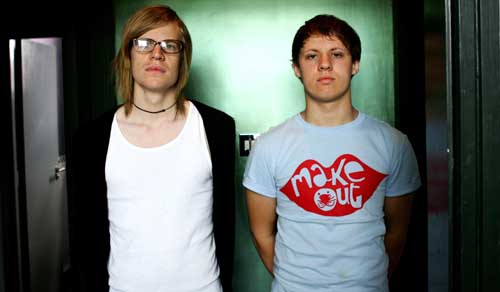 â€œWe have it on our MySpace page,â€ declares Todd (Marriott, vocals, guitars and synths). â€œIt says â€˜pop/alternative/emoâ€™ and some kid messaged us, â€˜How can you call yourself an emo band?â€™ But every band is emotional in some way. And itâ€™s just a tag weâ€™re used to and almost fond of, because those are the bands we like and itâ€™s not a term we find offensive.â€

â€œemo is such a dirty word now â€ begins William (Bowerman, drums). â€œEveryone defines Fall Out Boy, My Chemical Romance and Paramore as Emo. but for us, itâ€™s Rival Schools and Far and Jimmy Eat World, just amazing emotional music. Theyâ€™re the biggest influences on what we do. If we can make it not be a dirty word and make it a good thing again, thatâ€™d be amazing.â€

Listen to the album â€˜I Want You To Know That There Is Always Hopeâ€™, and itâ€™s clear that these two know their Braid from their Converge. When they were really young, not just pretty young as they are now (Toddâ€™s 18, Williamâ€™s 20), they both used to play in hardcore/ punk bands. They could easily have fine-tuned their sound into the anemic drivel that passes for emo nowadays, but instead they did what they felt was right. And something very special started happening. Their wistful, atmospheric synth pop is full of scattered sounds and dreams, undulating keyboards, superhuman drums and a fragile yet optimistic melancholy that underpins it all. Theyâ€™ve created a record thatâ€™s by equal measures vulnerable but punk rock, pop, yet prog.

Toddâ€™s lyrics, are subtle, understated open-heart confessions that delve into him, but transformed by their musical context, become something else, something bigger, something universal that everyone can relate to.

â€œItâ€™s always been that way, since I first started writing songs at eleven or twelve, â€he explains. â€œItâ€™s all personal stuff, I donâ€™t think I will ever write about someone elseâ€™s situations. I mean, Iâ€™ll write in the third person, but Iâ€™ll never be able to write songs that arenâ€™t about me, because Iâ€™m tooâ€¦involved. All of them were to do with how I am and how I view things and they still are.â€

I was a cub scout began in 2006, when Todd began writing songs on his own with a drum machine. He was only 16. Will joined later that year and I Was A Cub Scout, as they are now, were born. The year and a half that followed was whirlwind. Theyâ€™ve played over 200 shows, toured Europe and the UK, played shows with Panic! At The Disco, Babyshambles, Editors, forward Russia, mewithoutYou and Minus The Bear. In the middle of all this, Todd even turned 18 â€“ â€œI think I look a little older,â€ he quips. â€œMy skinâ€™s getting tired from all the touring!â€

Of course, what these crazy, stupid, intense, ridiculous, unbelievable eighteen months and 200 plus shows have been leading up to is one thing â€“ the debut album. Produced by Hugh Padgham (The Police! David Bowie! Phil Collins!) â€˜I Want You To Know That There Is Always Hopeâ€™ is a glorious, cohesive, starlit album which will be the soundtrack to many lives. People will fall in love with it and then fall in love to it. Theyâ€™ll share in its muted despair, its tentative optimism.

Itâ€™s a record â€“ like those by the bands who helped shape this band â€“ that people will need to listen to in order to get by in life. From the spacey â€˜Luceanâ€™, to the tentative steps of â€˜Our Smallest Adventuresâ€™, a paean to growing up, and the epic, mournful closer, â€˜A Step Too Far Behindâ€™, this is real music for real people with real emotions.

Itâ€™s a document of what Todd and Will have been through since this crazy adventure began, of how the band has evolved and how they, not as members of a band but as human beings with feelings and loves and hurts like the rest of us, have developed. One of the most telling signs of this is the re-recorded version of their first (proper) single, â€˜Pink Squaresâ€™, originally released just over a year ago. Itâ€™s as poignant and urgent as it was the first time around, but it now, like the rest of the album, carries the weight of their experiences on its shoulders, an extra year and a half of living, touring, growing up. â€œItâ€™s a lot of peopleâ€™s favourite song,â€ says Todd, â€œand although we were happy with that recording at the time, we can hear the difference between what weâ€™ve recorded now and what we had then â€“ how much better produced it sounds now and how much better weâ€™re playing as a band.â€

And as for the album title? â€œIâ€™m a very pessimistic person,â€ explains Todd. â€œSo itâ€™s really just something to remind myself to stop being so mardy and to just enjoy everything.â€
myspace.com/iwasacubscout