EMMERDALE stars are lining up to cycle for charity as part of Northern Ireland’s first Emmerdale Extravaganza on Saturday June 7 at the Ulster Folk & Transport Museum. Actors from the hit ITV soap will be mounting their bicycles for the 10k Family Bike Ride at the Holywood museum to raise funds for the Anthony Nolan Trust.

Mark Charnock, who plays Marlon Dingle in the show, was in Northern Ireland recently to promote the event and show off his cycling skills.

He said: “I can’t wait to come to Northern Ireland for the Emmerdale Extravaganza to support the Anthony Nolan Trust.

“It’s such a fantastic charity and we are inviting the people of Northern Ireland to get involved in the event. Come and join me on the 10k Family Bike Ride or just come down for a great day out”. 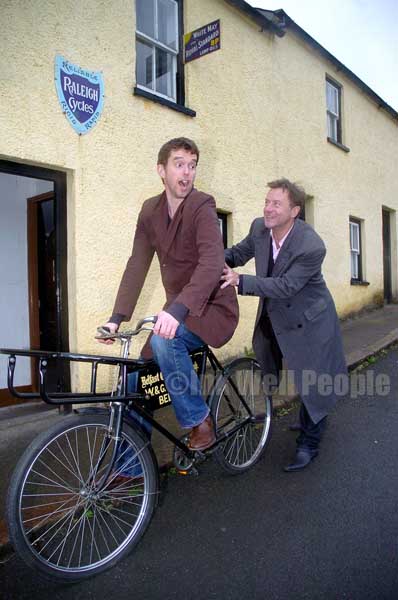 The Bangor-based North Down Cycling Club is supporting the charity by supervising the Emmerdale Bike Ride, which will start at Cultra Manor and continue throughout the picturesque country lanes of the Ulster Folk & Transport Museum.

As parking will be limited, organisers are encouraging participants to cycle to the museum and there is a special prize for the cyclist who has cycled the furthest distance from home on the day.

The Extravaganza, organised by Scottish company George Walker Events, will see a cast of 40 Emmerdale stars get involved in a variety of events at the County Down tourist venue, followed by a glitzy dinner dance at the Culloden Hotel on Saturday June 7. The charity events include Emmerdale Goes Loopy – which sees people being able to raise sponsorship to learn how to fly – a 5 km run, an abseil and 5-aside football and golf.

The event aims to raise much needed funds for the Anthony Nolan Trust, which takes back lives from leukaemia by managing and recruiting new donors to the UKâ€™s most successful bone marrow register as well as undertaking vital research leading to improvements in the effectiveness and safety of bone marrow transplants.

To book tickets or to register for the events log onto georgewalkerevents.co.uk or call 01506655361.