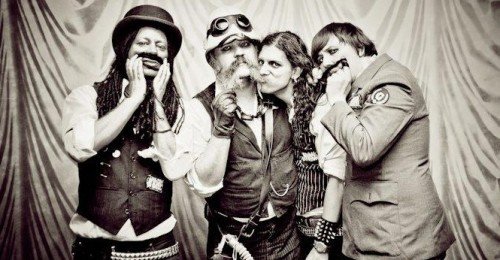 Friday afternoon saw London steampunks THE MEN THAT WILL NOT BE BLAMED FOR NOTHING accused of trademark infringement by the people behind the ‘Now That’s What I Call Music!’ series of chart compilations.

With disputed debut album ‘Now That’s What I Call Steampunk! Volume 1’ being released back in 2010., trademark owners EMI have been somewhat slow to catch-up to the time-travelling neo-Victorian band‘s antics.

Now that they’re on the case however, the disputable arbiters of all things current ‘n’ cutting edge in contemporary music have called on the meddlesome merchants of (18)77 punk rock to take action immediately.

Given just three working days to either change the album’s name or face legal action the band, who are fronted by ‘occult comedian’ seen on the stages of Download, Sonisphere etc Andrew O’Neill, have spent the weekend canvassing their fans for alternative titles.

After sifting through suggestions spanning the sublime to ridiculous, they have now picked a winner.

The record formerly known as ‘Now That’s What I Call Steampunk! Volume 1’ will be made available on iTunes et al again later this week, and also go to a second CD pressing, under new title ‘THE STEAMPUNK ALBUM THAT CANNOT BE NAMED FOR LEGAL REASONS’.

In the meantime, there are less than 50 copies of the original CD remaining, for fans to snap up while they can!

The Men That Will Not Be Blamed For Nothing also due release the follow-up to their debut on March 12th via Leather Apron records.

It seems fairly safe to assume that no other great mind could come up with the title; ‘THIS MAY BE THE REASON WHY THE MEN THAT WILL NOT BE BLAMED FOR NOTHING CANNOT BE KILLED BY CONVENTIONAL WEAPONS’.
www.facebook.com/blamedfornothing