THE Paddy Power sponsored All Ireland Elvis Competition arrived in Belfast with a spectacular live audition roadshow.
Members of the public auditioned at Victoria Square to win a wild card place at this weekendâ€™s final at the â€˜Las Bundoranâ€™ Elvis festivalSpecial guests attending the roadshow included Charles Stone, Elvisâ€™s tour manager in the 1960â€™s, American tribute artist Kraig Parker, the Reverend Steve Caprice, one of the most respected Elvis tribute artists in the UK, and Jim Brown currently the only Northern Ireland finalist in the All Ireland search. 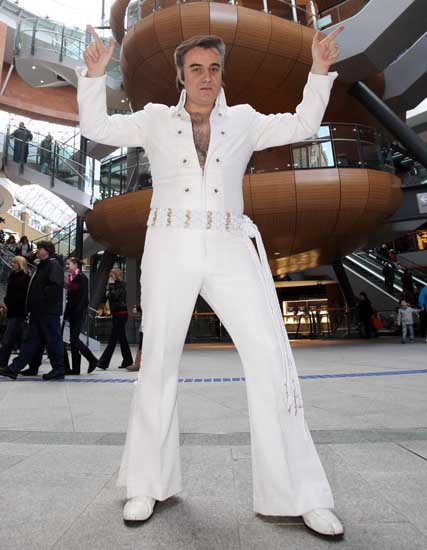 Elvisâ€™ old tour manager Charles Stone said: â€œI was delighted to come to Belfast to see the live auditions and I am really impressed with the talent in Northern Ireland.
“Elvis himself would have loved it here especially the members of the public who turned up today to perform in front of the audience here at Victoria Square.â€
The final of the search for Irelandâ€™s best Elvis is the headline event at the Bundoran Elvis Festival, sponsored by Paddy Power, taking place from October 31 to November 2.
The wild card winner will compete against seven other competitors in Bundoran with the winner representing Ireland at the World Championships in Memphis next year.
Ken Robertson from Paddy Power said: â€œThe talent in Belfast today was fantastic and the Elvis entertainment went down a storm with all the shoppers in Victoria Square.
“We will be making a decision on the wild card on Friday so fingers crossed another Northern Ireland finalist will join Jim Brown for the final in Bundoran which will be transformed into Las Vegas for the entire weekend.â€
The three-day festival will also be the setting for Pokerfest, a weekend long Texas Hold â€˜Em tournament in aid of The Downâ€™s Syndrome Association and Down Syndrome Ireland.
For more information on the Bundoran festival or to buy tickets log on to lasbundoran.com