A touch of Graceland will descend on Belfast City on Wednesday 10th September when a candidate will be chosen to represent Ulster in the forthcoming Paddy Power sponsored All Ireland Elvis Competition.
The Ulster Final is scheduled to take place in popular Belfast venue, The Spring and Airbrake and the organisers are promising a memorable evening where X-Factor meets Jailhouse Rock! 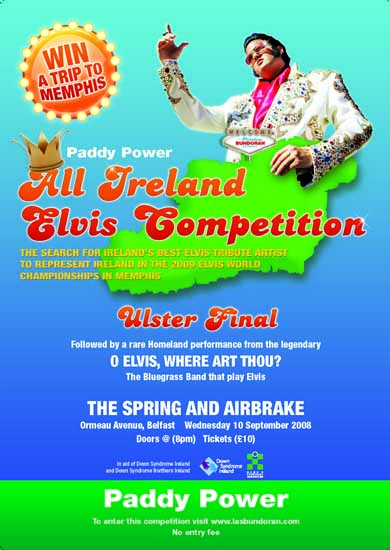 Entry is free on the night for all those taking part in the competition and all hopefuls will get to perform on front of a live audience and have their performance evaluated by a celebrity judging panel who will chose Ulsterâ€™s best Elvis at the end of the evening.

The winner on the night will represent Ulster at the All Ireland Elvis competition which will take place from 31 October to 2 November 2008 as part of the inaugural Bundoran Elvis Festival.Â  The best Ulster Elvis will compete against his fellow provincial winners and a selection of celebrity wildcard entries.Â  The overall winner will represent Ireland in an international Elvis competition in Las Vegas in 2009.

O Elvis, Where Art Thou? The Irish Bluegrass band that play Elvis. Formed in Connemara and Dublin and fronted by Micky Martin, the band have built a strong following in the far East and New Zealand. This is a rare homeland performance for them. If you think the Hayseed Dixies can lift a roof, just wait until you see these boys!

The event is organised by Peter Phillips, who also runs the largest Elvis Festival in Europe held each September in the Welsh seaside town of Porthcawl.Â  Phillps is also the man behind Tedfest, the annual Aran Islands celebration of Father Ted

Sponsored by Paddy Power, the three day Elvis jamboree will also be the setting for â€˜Pokerfest,â€™ a multi-location, weekend long, Texas Hold â€˜Em tournament in aid of Down Syndrome Ireland and Northern Ireland.Â  The team of Peter Phillips, Paddy Power and Down Syndrome Ireland was the partnership behind Ted40 â€“ the marathon push of the Father Ted Milkfloat around Ireland earlier this year.

Phillips says. â€˜Iâ€™ve wanted to bring the formula we use in Porthcawl over to Ireland for quite a while. When we pushed the Milkfloat through Bundoran I felt it was the perfect setting. With a combination of Elvis and poker we intend turning the town into Vegas.’â€˜

Padraic Delaney from the Down Syndrome Association said â€œDown Syndrome Ireland are delighted to be associated with the Bundoran Elvis Festival and Paddy Power.Â  Weâ€™re still revelling in the success of the recent round Ireland Fr. Ted Milk Float Push and we hope to capture some of the magic of that special event in Bundoran this Octoberâ€

Ken Robertson from Paddy Power said â€œItâ€™s about time that Ireland had its own best Elvis. Weâ€™re expecting massive interest in this yearâ€™s event and are all counting the days until we build our own Las Vegas in the hills of Donegalâ€