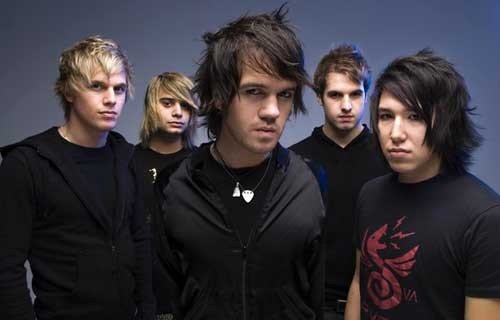 Elliot Minor is a five-piece from York whose music is an explosive collision of Rock and Classical.

The music is daring and unafraidâ€¦Racing pianos, driving guitars, sweeping violins and crashing cymbals harmonize in a symphony of sound, evoking the stories and emotions of frontman, Alex Davies. The songs are arranged around Elliot, the band’s piano, and they are rich with minor and dissonant chords, hence the name, Elliot Minor.

Their debut album was produced by Jim Wirt (Incubus, Hoobastank, Something Corporate) and mixed by Neal Avron (Yellowcard, New Found Glory, Fall Out Boy), and finds Elliot Minor mixing approaches from the piano-infused hard rock of Time After Time to the sonically charged Parallel Worlds, which is embellished with grandiose orchestration.

They deliver pitch perfect three-way vocal harmonies on the infectious The White One is Evil and add an undertone of ultra-melodic punk to Still Figuring Out.

A lot of the harmonies are classically based, so that whole side of my background is represented, says vocalist/guitarist Alex Davies who, like the rest of the band, comes from a classically trained background.

Then there’s the whole band performances backed by an orchestra that really emphasizes those instruments and the chord progressions.
ELLIOT MINOR
THE SPRING & AIRBRAKE
FRIDAY 26TH JUNE
ALL AGES SHOW (Under 14;s to be accompanied by an adult
TICKET DETAILS :ON SALE THURSDAY
In person: From 22 Ticketmaster outlets province wide / Easons / Katy Dalys
24hr hotlines: Tel: (NI) 0870 243 4455 (ROI) 0818 719 300