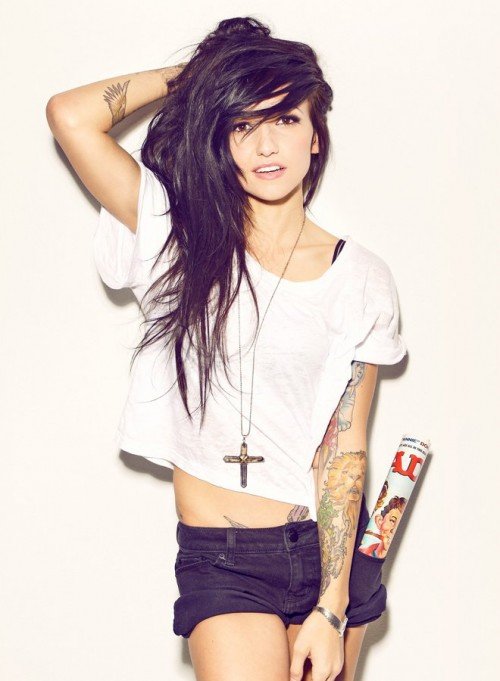 When electro-rock sensation Lights first hit the music scene in 2008, she was just a songwriter with a synth and a dream. Her name may have been pluralized but Lights Poxleitner was a one-woman show who played and programmed her own instruments and sang her own lyrics. She plays Belfast’s Speakeasy Sunday 12 February 2012:
A new album is due on March 5: “It’s a huge step,” she readily admits.

“For a year after my first record, I was confused and searching. I was writing all over the place and not finding anything that was essentially different. But after tour last year I was turned onto dubstep.”

Dubstep led Lights away from the “perfection” of her past work. “Everything was tuned and timed just right. The new stuff is raw and gritty but still pop with a focus on the melodies. It’s the marriage of those two that make it really different and unlike anything I’ve ever done before.”

This dirtier direction came from collaborating with Holy Fuck, a fellow Juno-winning, electronic-influenced Canadian act who she met when both played the dance stage at last year’s Reading and Leeds festivals in the UK.

Impressed by their “grime and grit,” she decided to see what might happen when she infused her pop sensibilities with their experimental tendencies.

“I went over to Brian [Borcherdt’s] house with Graham [Walsh] and we just started jamming until something started to form, as opposed to the last record which was more structured and less live feeling. We wired old synths and toy synths through all these pedals and machines from their junk table,” she laughs. “They’re straight-up mad scientists.”

Her other main collaborator was Shad, who she knew through a mutual friend. “He’s so humble and so intelligent,” she says, “and I knew he’d kill it.” Indeed, Shad drops his typically articulate knowledge on the crunchy, soiled “Everybody Breaks a Glass” and “Flux and Flow,” which Lights describes as “the perfect marriage of this sweet melody and the hardest beat ever. It’s about how that applies to life because you have to be soft and you have to be strong.”

“A lot of those songs came from a sad but hopeful place. I was alone and pondering a lot. I’m a lot more aware of the person I am now and each of these songs is about an experience I’ve gone through,” she says. “This record came from a very happy place.”

Then why is it called Siberia? “It’s based on something that was said to me, that we could be happy even in a place like Siberia. It was such an inspiring thing to say, because Siberia is cold and a little daunting and represents unfamiliar territory.”

That last bit is particularly sticky for Lights, who left her safe pop haven for these unexplored sonics, though the metaphor carries even further because despite being an infamous land of ice and exile, Siberia is epically beautiful and so is Siberia.
Red Roof Presents….
LIGHTS: Sunday 12 February 2012: BELFAST/Speakeasy
Tickets: £10 + booking fee +14’s Show
Available NOW from Ticketmaster.ie and Queens Student Union.
facebook.com/lights