Eddie Jordan widely known as a former team boss of Formula 1, has swapped life on the track to take pole position gigging on the public and corporate events circuit with the launch of his own four piece band, irreverently named Eddie and the Robbers. The name has derived from the many years that Eddie spent in the motor industry getting money out of investors…always ‘on the rob!’As far as his musical talent is concerned, Eddie believes his Irish upbringing fuelled his interest in becoming a drummer. 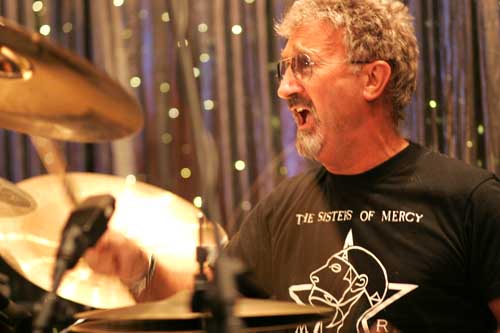 Eddie explains: “As a kid in Ireland I used to play the spoons and I think my desire to play drums was just a natural progression. Music has always been a passion of mine and when I get together with the guys in the band for a performance, the place really rocks.”

This year Eddie and The Robbers have headlined on the Pet Sounds Stage at T in the Park and performed for thousands of music fans at the Isle of Wight Festival. Forthcoming gigs include Rally in Ireland and Robert Sangster’s Pro-Am next January. They can then be seen at Amber Rocks in March 09 and not surprisingly, Formula 1 gigs in Monaco, Greece, Italy and Singapore
throughout the season. On the festival scene they are already confirmed for the Goodwood Festival of Speed, the Isle of Wight and Oxygen Festivals in 2009.

They are also enjoying huge success performing at corporate events entertaining celebrity guests. They have supported soul legend George Benson, and they acquired a whole new set of fans when they appeared on the same bill as Belinda Carlisle and Steve Harley & Cockney Rebel.

Playing a selection of covers and original tracks ranging from Wilbert Harrison’s ‘Let’s Stay Together’ and the Stones’ classic ‘Brown Sugar’, to Elvis Costello’s ‘Pump it Up’ and Screamin Jay Hawkins version of ‘I Put A Spell on You’, the impressive line-up with Eddie on drums, boasts some of the industry’s most talented musicians.