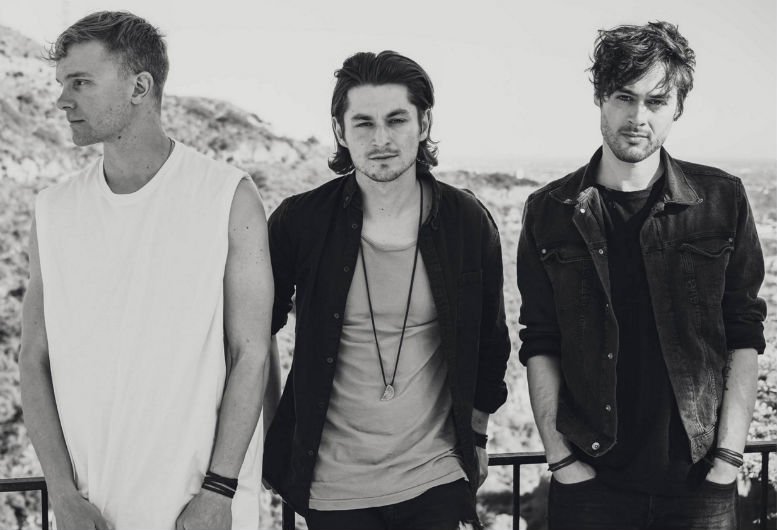 ‘Hunting Melodies’ is a blazing alternative-rock number drenched with an unashamedly big electropop vibe, suitable “for the first hours after sunset, when you still see that magical glow on the western horizon that leads you into the night.”

How are you today guys?

Good! We just came back from Berlin where we had a songwriting session with DJ/Producer Moguai. He has a totally different style than us, but it went pretty well and we had a lot of fun.

At the moment we try to be as open as possible with opportunities like that. There’s a lot to learn about different approaches and that helps to keep the creativity flowing.

Why did you pick that name for the band….Any strange reason?

It sounds just beautiful, maybe flamboyant…like almost everything does in French haha…

But it has that tragic, morbid connotation to it. All that reflects our sound pretty well.

Can you talk about your new track ‘Hunting Melodies’?

It’s based on that dark, hypnotic bass riff that Bo brought along…well it’s actually a pitched guitar like almost everything you’ll hear on our records, we barely use synthesizers.

So we jammed on that riff for a long time and developed that song structure which is like a ride through the night.

Give us an inside on your forthcoming debut album ‘Nocturnal Rapture’…

We tried to explore our full range of sounds this time but still wanted to make sure that it tells an overall story and feels like everything belongs together.

So there will be a lot of synthie-esque guitars, reverb, dancy beats, rock drums and pop-vibe.

What’s the best and worst thing about performing at huge events like SXSW in Austin, Texas?

There’s this amazing vibe through the whole city but at the same time you have to try and keep a clear mind because 6th street is just such a madhouse where you get thrown on stage and then you have to get your act together and deliver a good show.

There’s a bit of a post-punk hype at the moment with Bands like Die Nerven, Human Abfall, Kaufmann Frust, then there’s a lot of rap and hip hop traditionally.

Not so much indie rock though, maybe because of the lack of venues that you can play at, or that bigger acts would come to.

But fortunately there’s a new venue now so hopefully that will boost the local scene as well.

Do you have any special or bizarre pre show rituals?

Not at all! Or is it strange that we don’t have one?! We all individually try to focus on the show and then it’s a brief ‘ok let’s destroy this place’ before we go on stage.

A non-musical influence are definitely movies like those by Sofia Coppola. I don’t know what it is but they have a soothing vibe to them.

Up next is The Great Escape Festival where we play on Playground UK’s alternative escape stage. You’ll be impressed how big a three piece with two guitars and a drum kit can sound!