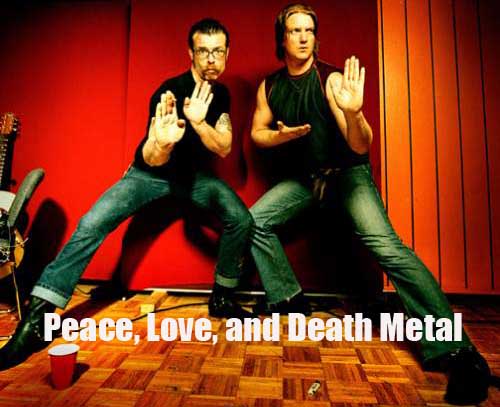 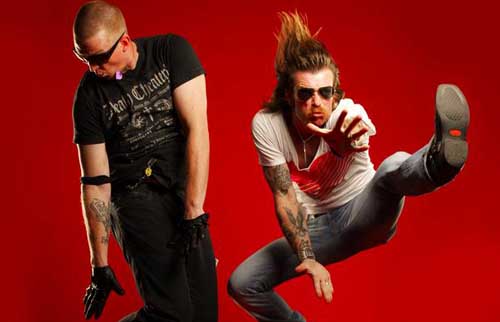 In 2004, Eagles of Death Metal launched their wholesome good-graciousness with â€œPeace, Love, and Death Metal,â€ It was a favorite of advertisers, as several songs from it were used in television advertisements including those for Ask.com, Comcast, Payless ShoeSource, Nissan Motors, Budweiser, Pontiac Motors, Wendys, as well as in the trailer for the film Thank You for Smoking and for a promotional disc for the film Grindhouse. 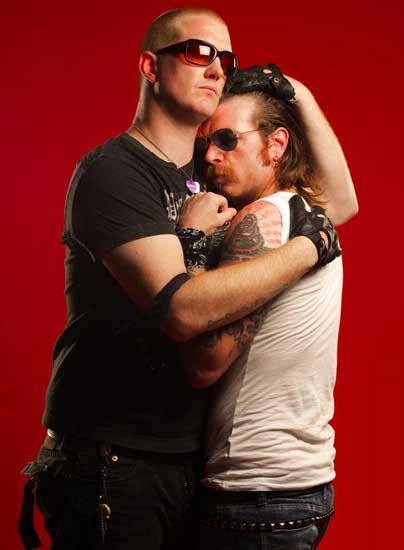 When The Eagles of Death Metal opened a tour for Guns N’ Roses in 2006 they weren’t that well received. So much so that they were booted off the tour and Axl Rose asked if the crowd enjoyed ‘The Pigeons of Sh*t Metal’. EODM swiftly released a statement regarding the incident.At first, the audience refused to welcome us to the jungle, but by the time we took our final bow, it had become paradise city. Although Axl tried to November rain on our parade, no sweet child o’ mine can derail the EODM night train. We say live and let die.

The latest creation from the EODM, â€œHeart Onâ€ was unleashed October 28th on Downtown Records. The first track: â€œAnything â€˜Cept The Truthâ€ gives everything an â€˜EODM ear could desire, PLUS the truth, thatâ€™s real talk honey. â€œWannabe in LAâ€ paints a perfect picture of the socal-loâ€™cal, Palm trees, sun, fun and of course buns. Followed by the one, two, three puncheroo; High Voltage, Secret Plans, Now Iâ€™m a Fool. Etc, etc,. Boots Electric and Babyduckâ€™s soundtrack for Heart On hedonism â€œHigh Voltageâ€ has the most infectiously grimy groove ever laid to tape, â€œHow Can A Man With So Many Friends Feel So Aloneâ€ features guitars that buzz like a bee and sing likeâ€¦me. The Tag Team Supreme bring along a wild bunch-o-bandits for the ride including Miss Kat Von D, Brian â€œB.O.C.â€ Oâ€™Connor, Darlinâ€™ Dave Catching, Alain Johannes, Troy Van Leeuwen, Brody â€œQueen Beeâ€ Dalle, and Kim â€œKoko Bubblesâ€œ Martinelli. The album does not disappoint, the hits are hot and music is magic. Heart On stands â€˜firm.â€™ Not to worry, a full suited & booted, hand-crafted EODM world tour is in progress- these dates are surely not to miss. so donâ€™t miss. see yaâ€™ on tour!