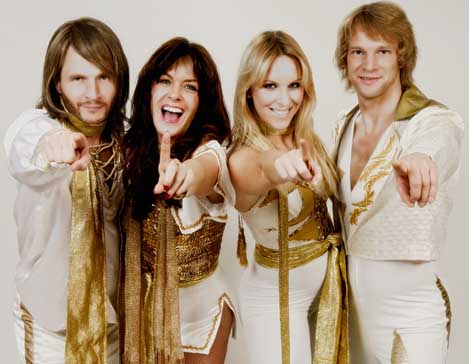 ARRIVAL from Sweden started in 1995 as a trademark created by Vicky Zetterberg. Arrival is today, the largest touring ABBA show in the world, having toured over 20 nations – USA, Vietnam, China, UK, Australia, France, Holland and Sweden.

The show is the only ABBA show in the world with exclusive rights to identically recreate exact versions of ABBA’s original clothing, this was exclusively approved by Owe Sandstrom who created and designed all ABBA’s clothing.
Over the past 12 years, the show has grown from being 6 people on stage to becoming a full scale production with 12 people on stage performing 100% live.

ARRIVAL recently received exclusive permission from Bjorn and Benny of ABBA to perform, and the record was unreleased ABBA track ‘Just A Notion’ released in 2008.

The band is part of the amazing show ‘Abbasolutely’ which is currently embarking on a full scale European Tour including Ireland and the UK. The show includes original musicians from ABBA including Finn Sjoberg (Guitar) and Roger Palm (Drums) performing ABBA classics such as Dancing Queen, Money Money Money, Waterloo, Super Trouper, Voulez Vous? performed with such conviction you’ll believe it’s really ABBA on stage.

There are many ABBA tribute shows performing around the globe, but this is the only one you need, event the official ABBA fan club recently announced the show to be the best ABBA tribute in the world.

So dust off your flares and platforms, Arrival are performing at The Waterfront Hall on Thursday 11th December, and promises a night not to be missed! Make this a Christmas party night to remember!!
ARRIVAL – THE MUSIC OF ABBA LIVE!
The Millennium Forum
Next Wednesday 10th December
Tickets available from The Millennium Box Office
Credit Card Bookings 028 71264455
Book online @millenniumforum.co.uk