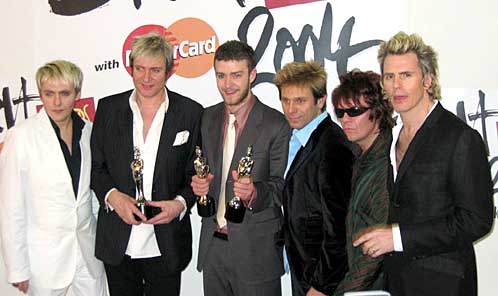 DURAN DURANâ€™S Simon LeBon (vocals), Nick Rhodes (keyboards), John Taylor (bass) and Roger Taylor (drums) are currently making history in New York with a 2 week run of Shows on Broadway to celebrate the launch of their upcoming Album, RED CARPET MASSACRE, due for release in Ireland on 19 November.

RED CARPET MASSACRE marks an all time creative high in DURAN DURANâ€™s illustrious career. As Nylon Magazine described it in their most recent issue â€œitâ€™s like a stroke of lightning captured on recordâ€¦ itâ€™s a triumph, a marvel, and a hell of a lot of fun. Duran Duran have got their sexy back.â€

Anticipation for the release of the new Album, on which the Band have worked over the past year with Justin Timberlake and top producers Timbaland and Nate â€˜Danjaâ€™ Hills, is already at fever pitch. The UK premiere of RED CARPET MASSACRE originally scheduled to take place at the Odeon in Leicester Square had to be rescheduled when tens of thousands of fans jammed telephone lines trying to secure tickets prompting crowd control concerns for city officials. Due to overwhelming demand, the premiere is now to be moved to a larger venue.

DURAN DURANâ€™s new single FALLING DOWN, which was co-written and produced by Justin Timberlake, is released on 12 November.
DURAN DURAN

Live at the Marquee Phoenix Park â€“ Wed 5th Dec â€™07
Tickets on sale Now!
Tickets for DURAN DURAN Live At The Marquee on 5 December on sale Now priced 65.70 Euros. These will be available from all usual Ticketmaster outlets.