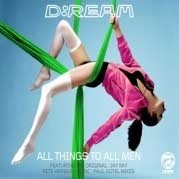 Peter Cunnah and Al Mackenzie; collectively D:REAM are inviting their fans to provide the backing vocals to a track entitled â€˜We Are Fansâ€™ from their forthcoming album.

The pair, who split up over ten years ago, decided to reform after a chance meeting on a park bench and have been recording together with a new sound and a tour to promote their comeback.

D:REAM are encouraging members of the public to download â€˜We Are Fansâ€™ from their website and then send their backing vocal contributions as .wav files. In order to participate a microphone and some recording software will be required â€“ full details are on the bandâ€™s website.

Al says â€˜,We wanted to get the sound of a large live audience. As we’re not really selling out Wembley Stadium at the moment (yet!) and I am addicted to the internet Peter thought that this could be a great, if time consuming idea. It helps get people who are interested in us involved in a way that could never have been done in the past and other people, who may not know us, interested tooâ€¦â€™
D:REAM have been promoting the campaign via Twitter also.
www.d-ream.co.uk