DragonForce were the metal sensation of 2006, making their mark right across the globe with a colossal run of shows to promote one of the year’s most remarkable releases.
â€˜Inhuman Rampage’ left the press in a state of critical meltdown.


But it wasn’t just Britain that fell under the band’s spell. Magazines from France, Italy, Spain, Sweden, Norway, Holland, Japan and more joined them and Germany’s Rock Hard astutely predicted: “DragonForce could become the first British metal band in ages to reap respect from all over the world.”

The six-man wrecking crew will have notched up 3 world tours, including North America no less than four times for â€˜Inhuman Rampage’, winning kudos from peers and influences alike, accumulating several shelves full of awards along the way and sending audiences wild with an explosive musical style that features the band members favourite elements from all styles of music from rock, metal all the way to early 90’s video games music; a unique style that in the absence of anything more descriptive they like to call â€˜extreme power metal’.

If anything, the DragonForce sound is as complex and hard to pin down as their bizarre combination of national heritage. Though based in London, the group have roots in Hong Kong, New Zealand, South Africa, Ukraine and with the addition of new bassist FrÃ©dÃ©ric Leclercq, France.

â€˜Inhuman Rampage’ is the third DragonForce album, following â€˜Valley Of The Damned’ (2003) and â€˜Sonic Firestorm’ (2004). Those first two records were well received in their own right, but the band’s current disc – the first to be marketed by Roadrunner Records in the UK, N. America and Australia – is the one that really thrust them to international contention.

“This time around we were able to make videos and MTV ended up playing them,” explains Herman Li, one half of the band’s unstoppable guitar army, referring to the popular promos for â€˜Through The Fire And Flames’ and â€˜Operation Ground And Pound’. “It meant that people could hear the music and decide for themselves,” he adds. “The magazines started to take quite an interest in us, too, at last. Until then it had all been down to the internet and word of mouth.”

DragonForce began touring the third album even before its release, breaking their duck Stateside by headlining – and, more importantly, filling – clubs of varying sizes. In many cases, tickets for these dates sold out within a week. There were unusual scenes in Los Angeles, Sunset Boulevard being temporarily closed down as swarms of DragonForce fans departed the Whisky A Go Go in post-gig, sword-waving euphoria. The group’s growing reputation quickly led to a prize spot on the main stage of the US Ozzfest.

On that same tour, Ozzy Osbourne’s guitarist Zakk Wylde told an interviewer: “DragonForce are awesome, bro.” Meanwhile, an astounded Kirk Hammett of Metallica agreed: “Those guys from DragonForce are the fastest guitar players I think I’ve ever seen. They’re like Yngwie Malmsteen on steroids.”

Once the Ozzfest was over, striking while the iron was still hot, the band jetted across the Atlantic – AGAIN! – for another coast to coast headlining US tour, including sold out shows at the Wiltern Theater in Los Angeles and the Nokia Theater in New York’s Times Square. 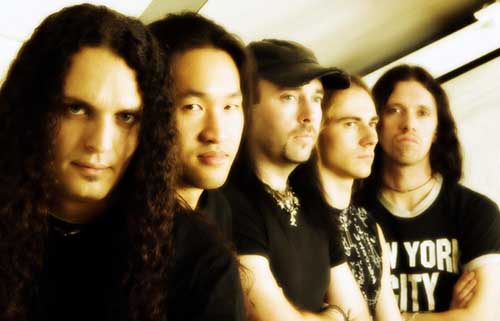 As well as concentrating on the USA, the group were invited to play the main stage at the UK’s Download Festival in the summer of â€˜06, also playing two sold out UK headline tours, 3 visits to Japan including Tokyo’s Loud Park Festival, their debut tour of Australia (again, sold out) and maintaining an equally high profile in mainland Europe.

With so much roadwork under their collective (bullet) belt, it’s no surprise that the band’s live show has developed into a blink-and-you’ll-miss-it audio-visual extravaganza. The guitarists bounce around on trampolines whilst sending rapid-fire arpeggios of red-hot riffing and scorching solos into the stratosphere. A chest-beating frontman in the old school mould, South African ZP Theart covers every inch of the stage, never missing a note. Vadim Pruzhanov’s lunatic keyboard solo is a sight to behold, but he also makes a point of throwing shapes at the front of the stage on a portable instrument. It’s more than obvious that FrÃ©dÃ©ric Leclercq began life as a guitarist, offering far more than mere rhythmic accompaniment to Dave Mackintosh’s frantic yet refined percussion.

“There has been a huge leap,” acknowledges Li. “Something I noticed on the last UK tour is that we’d grown more on that tour than over both the previous two albums. That’s partly because we had our own production and more control over technical things that used to go wrong, but mostly it’s because we’ve grown as a band.”

As 2006 drew to a close, Li and Totman made a strong showing in the annual Guitar World readers’ poll. The shred-tastic duo romped home in four categories; namely Best New Talent (where they registered an astonishing 70% of the vote), Best Metal, Best Riff and, of course, Best Shredders. The pair also appeared on the same magazine’s cover, alongside Megadeth’s Dave Mustaine. Not to be left out, the readers of Total Guitar also hailed â€˜Through The Fire And Flames’ as Guitar Solo Of The Year.

2007 started nicely with Herman Li receiving an invitation to perform as special guest with guitar legend Steve Vai at the Ibanez Jem/RG model 20th Anniversary show in Hollywood, California. As well as playing on Steve Vai’s set, Herman shared the stage on the evening all star jam with guitar heroes such as Joe Satriani, Paul Gilbert, Tony MacAlpine and Andy Timmons.

Demand for DragonForce in their adopted home of the UK has been little short of staggering – especially considering the hostility that their type of face-melting metal traditionally faces. With a second show at London’s Astoria having been added to the recent UK tour, one might say that DragonForce have single-handedly taken a blowtorch to a scene that seemed almost cryogenically frozen. “The entire the British tour sold out,” marvels a smiling Li. “That was incredible. But if there’s a reason for all this success – apart from the work we put in on the road – it’s because we’re selfish and stubborn. We write the music that we want to hear; the opinions of others are irrelevant to us.”

After a break for Christmas and New Year, DragonForce returned to the road in St Petersburg, Russia, on 9th February 2007. Song ideas for album number four are already in place and the band are hard at work in London, laying the tracks to tape. Expect a late August release for the forthcoming album.